June was much like May, as the month proved somewhat uneventful. Of course, both Kay and I played golf a bunch, and Kay continued with her “social butterfly” duties of attending and participating in various meetings.

For me, the early part of the month was exciting as we had our first observed visit by a male Diana Fritillary butterfly. This is Arkansas’ state butterfly, and is fairly rare. We had observed others in a location near here, and in the mountains just north of us. 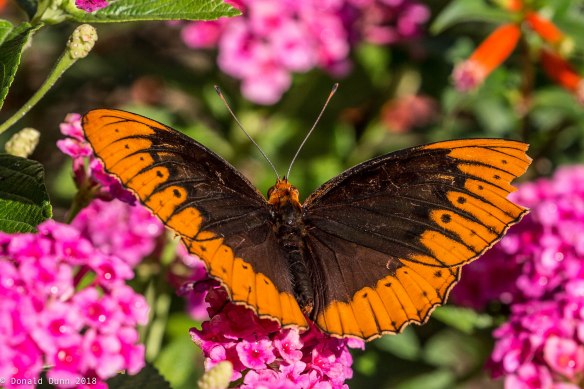 We joined the Hot Springs Village RoadRunners this month, an RV club here in the Village, at the urging of our friends, Stan and Fern. We traveled to northwest Arkansas to the Creeks at Cave Springs RV Resort to join several other members for viewing the Northwest Arkansas LPGA golf championship. This tournament has become an annual event for us. Regretfully, while pulling into the RV site, I sideswiped a steel post protecting an electrical box causing significant damage to the passenger side of the motorhome; it’s our first major accident in 10 years of RVing. 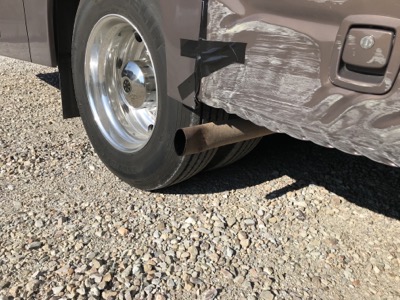 Northwest Arkansas is home to a great urban bicycle trail, the Razorback Regional Greenway. This paved, multi-use, off-road trail is 36 miles long and extends from south Fayetteville (near where I lived as a junior at the University of Arkansas) to Bella Vista, a sister community to Hot Springs Village; funding for its planning, design, and construction was via several grants and support from the Walton Family Foundation. This heavily used trail passed through Fayetteville, Springdale, Rogers, and Bentonville on its way to Bella Vista, and providing for great cycling. One negative, however, is that signage is relatively poor, and with massive construction underway in the region, made for some missed turns and extra milage.

Terminus of the Razorback Regional Greenway

There are many trails in the region, and Kay and I cycled the Lake Fayetteville Trail, which provided an uphill challenge or two, but great scenery.

Kay on the Lake Fayetteville Trail

The Northwest Arkansas LPGA is a fun event and this year hosted all but one of the world’s top lady golfers, Brook Henderson. It’s amazing how petite most of the ladies are, particularly when one views the long distance they can hit the golf ball. We don’t really have a favorite which made it fun to cheer for all of them. We hang out at the 17th hole, the loudest hole in the LPGA—it’s a hoot with all the yelling, clapping, and hog calls. 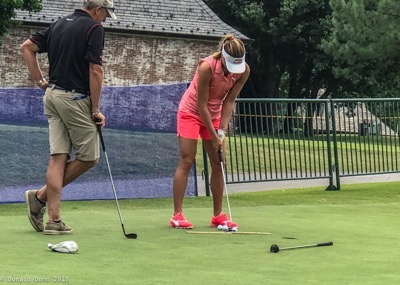 Lexie Thompson getting a putting lesson