As Christmas neared, Kay caught an ugly bug.  A trip to the clinic resulted in an injection and prescription; bronchitis is not fun!  While she visited the clinic on the west side of the Village, I traveled to Memphis to see Harper, Jenny, and Brian, and purchase new hearing aids at Costco.  Normally, I would have bought these at the Costco in Pharr, Texas, but the Costco there has not had a hearing aid specialist for several months, and none is expected in the foreseeable future.  Kay’s condition worsened, and she was as sick on Monday, December 19, as I’ve ever seen her.  She gradually turned the corner, and by week’s end was feeling almost normal, though coughing virtually every breath. 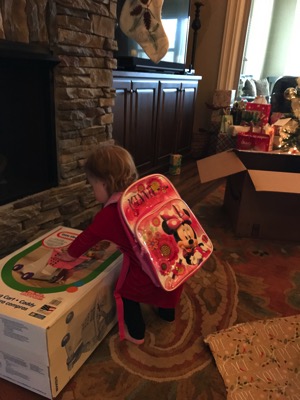 We celebrated Christmas with Karyn, Matt, Ridge, and Aker on Friday, December 23; regrettably Ron and Cheryl were on their way to join us when they received a call that Cheryl’s mother had fallen, and had broken an ankle/leg and severely sprained the other.  We had a great Christmas celebration, but missed Ron, Cheryl, Kaden, Jorday, Jenny, Brian, and Harper.  Changing times and two generations of blended families make the traditional Christmases of past extinct experiences. Having finished our Christmas “celebration” at home, we began de-constructing holiday decorations right after the kids left, and finished, with an empty looking house, that evening.  A tradition Kay and I have been practicing since before we married is to attend Christmas Eve service at church; this is usually a carols, candlelight, and communion service, and we cherish them.  After the service, we attended a “Methodist” spaghetti dinner at Jim and Jackie Morris’ along with Jackie’s sister and brother-in-law, and daughter.  It was a very enjoyable evening, and we appreciated being included. 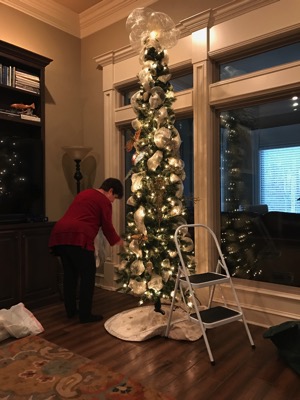