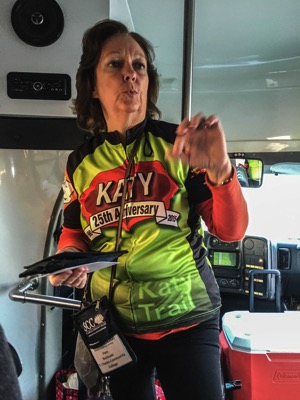 First, there are not enough superlatives to describe the sheer exhilaration and excitement I experienced on the trip (Kay’s Take follows in an immediate blog entry).  It far exceeded any and all expectations I had for the trip.  And, despite my obesity, I fared much better than imagined.
There were too many good things about the trip to mention, but here are a few.  First, Road Scholar knows how to do senior travel; it is fun, busy, and not terribly expensive—experiences on both our trips were overwhelmingly good—and we plan to do a Road Scholar trip annually hereafter.  The trip coordinator, Pam Ronkoski, working for and through St. Charles Community College, was fabulous and seemingly had thought of everything; her attention to detail was magnificent.The “support” staff—Rochelle, Don, Terry, Bob, Tim, and Steve—were amazing and took care of the actual ride, transportation, SAG stops, and our bikes and luggage. 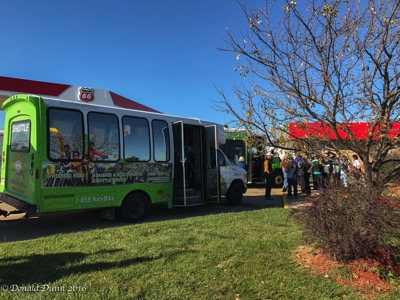 The SAG stops were spaced perfectly, and snacks and lunches provided at these stops were very good and timely, meeting energy and hydration needs.  The trail was in very good condition with few ruts and soft spots, and despite the dry conditions proved not too dusty.  The weather was good, though the steady 12 mph headwind and drizzle on the 54 mile ride was daunting.  The side trips and lecture—Bothwell Lodge, Sedalia Depot, Missouri State Capitol Building, Stone Hill Winery, and lecture by Dr. Anita Mallinkrodkt—were interesting and provided good diversions, though most of us were there to just to ride; but we probably desperately needed the breaks!  Lodging ranged from great (Country Inn and Suites in St. Charles, Hotel Bothwell in Sedalia, Isle of Capri Casino Hotel in Boonville, Capital Plaza Hotel in Jefferson City) to adequate (Harbor Haus Inn & Suites in Hermann and Super 8 in Washington)—all were the best available given the location and setting of the KATY Trail.  The food was good to adequate, though nothing to write home about; however, The Mother In Law House in St. Charles was quite good—again, all were the best available give the location and setting. 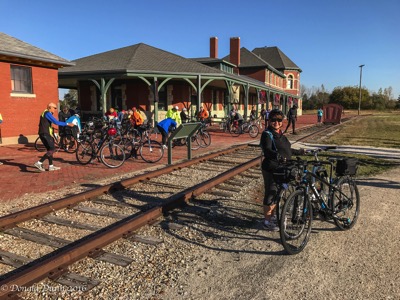 Our equipment performed well.  The bicycles (TREK DS 8.3 for me, and DAWES for Kay) met the demands of the trip, though many adjustments in handlebars and seats were made.  Kay’s new DAWES bicycle required a pedal about midway through the trip due to a “frozen” bearing in the bike’s existing left pedal.  Kay complained that her seat was uncomfortable, and that she wants gloves with more gel cushioning.  Given prior knowledge, I would have taken the TREK FX 7.6, outfitted with wider tires, as it has better components; I took the TREK DS 8.3 because of wider tires and suspension, but the suspension considerably slowed the bike, and I turned it off for most of the ride.   We did not need or use front or rear lights, and the support staff had all the necessary tools and parts for repairs; thus, we left ours in the car at the hotel in St. Charles.  Biking helmets were required and ours were adequate; I wore a cycling skull cap under mine for perspiration, sun protection, and warmth as needed.  I used toe clips on the pedals, and wouldn’t go again without them.  My old Keen hiking shoes worked well, but developed a horrible stink.  Using unflattering, but useful, cycling jerseys we also wore mock Ts under the jerseys much of the time; cycling jerseys have rear pockets for holding various items.  We had both chamois cycling shorts and chamois cycling underwear; I much prefer the  shorts.  We began using Chamois Butt’r a couple days too late; it proved to be a life saver for our butts!  Our Marmot breathable jackets worked, particularly for wind, but moisture still developed inside; good breathable cycling jackets would have been great.  We both carried cycle bags on rear racks, and they were needed.  We both also used Camel Bak hydration systems, excellent for drinking on the go. 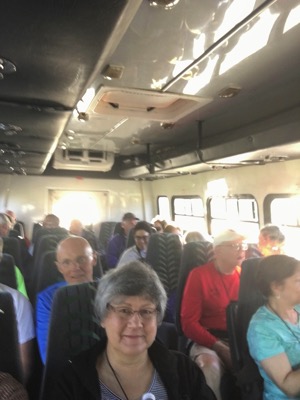 Last, but certainly not least, were the people.  We raised eyebrows at a few at the start, but soon realized they were good folks who shared many of the same interests.  Most were widely traveled, and most had been on numerous Road Scholar trips.  Many lasting friendships were formed, and invitations to visit made.
Bottom line for me is that I very much enjoyed the trip, and hope to do it again someday if time and life permit.