After returning from Ohio and Ontario, we resumed life in the Village; I played golf almost every day until my back finally gave out, and Kay kept busy with social engagements.  Notable activities were as follows. 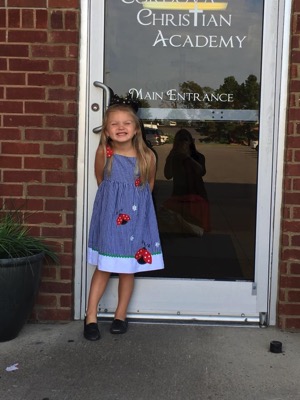 Our older granddaughter, Harper, started pre-kindergarten this month—They grow up and we grow old way too fast. 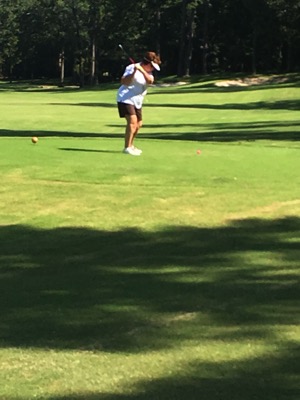 We joined Ron and Kathy Felger as a team in a couple’s scramble on Sunday afternoon, September 11, and won low gross score.  I joined the Hot Springs Village Ageless Bicycle Club on September 14 for a 30+ mile ride on the Arkansas River Trail and other routes in and around North Little Rock and Little Rock.  The rode at a quick pace, and rested too little for my taste, but I really enjoyed the ride. Kay, as Care Zone Co-Leader for our Care Zone, hosted a small get together at our house on September 15.  Our team of Mike Cigleman, Don Atchley, Jim Piersol, and myself played in the United Methodist Men’s golf tournament on September 19 at Diamante Golf Club.  We had a good time, and scored well, but didn’t win, though Mike won closest to the line on a drive, and lost the putting contest in a “Putt Off”.  The Zoysia fairways at Diamante are very nice and provide nice lies, but the rest of the course is average; I’d rather play any of ours.  Also, they ran out of beans, potato salad, and cobbler before we made it to the buffet line, and that was a big disappointment.

Though the daytime heat continues with highs in the low 90s and heat indices in the low 100s, mornings began to cool down to the high 60s—comfortable enough for enjoying hot coffee and tea on the deck after awaking—shortly after mid-September.

Kay had a long birthday, stretching some 5 days!  She and I celebrated on Thursday, September 22, with a trip to the Apple store in Little Rock for a new iPad and an Apple watch, followed by dinner at Vesuvio Bistro.  Vesuvio Bistro is a very highly rated restaurant, but our experience was not good.  First, Kay ordered a glass of wine and it came about 1/4 full, $10; the expensive G&Ts were so so, but nothing compared to those made by Jim Passe.  The Caesar salads were small, the dressing good, but sparse, and the croutons too large to eat.  The pasta, at $18, was average at best.  Kay’s entree of grouper, at $32, was good, but the Osso Buco (braised pork shanks) was less than average—the meat was too crispy,  on the outside, and chewy, i.e. tough, otherwise.  We shared a small dish of spumoni, at $8, and it was okay.  Our total bill, including taxes and tip, was over $170.  We expected more, much more, and won’t eat there again!.  On her actual birthday, she spent the morning shopping and having lunch with daughter Karyn in Little Rock, and in the evening had dinner with Ron and Cheryl in Hot Springs.

The high temperatures of summer finally broke on Monday, September 26 as a cold front ushered in daytime temperatures in the 70s.

We never tire of the view from the sunroom, deck, and master bedroom. 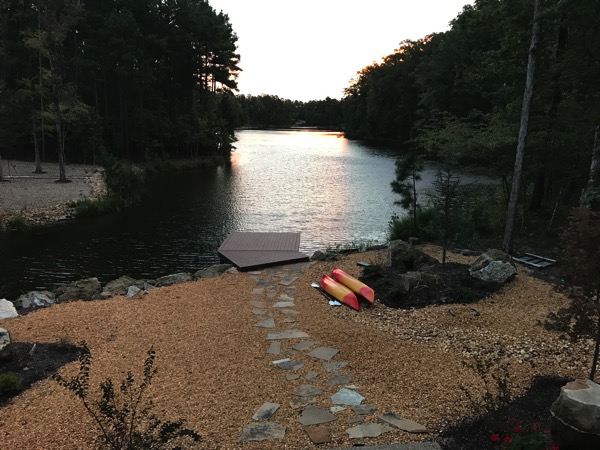