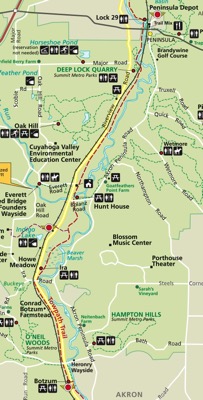 We awoke refreshed Sunday morning, and Kay was feeling a bit better.  After a slow start, bicycle tires were inflated, and the bicycles loaded for a drive to Cuyahoga Valley National Park (CVNP); CVNP is between Cleveland and Akron, Ohio, and includes parts of both cities.  They CVNP is the 11th most visited national park in the national park system, due in large part to the original towpath along the Ohio & Erie Canal being converted into a hiking/biking trail, considered by many to be a cycling mecca.  (HISTORICAL NOTE—This large, urban green space faced development pressures in the 1960s, but, along with its historic features, was protected by a coalition of citizens, and local and state governments.  Following its designation as a national recreation area in 1974, the Cuyahoga Valley became a national park in 2000.  Notable among its historic features is part of the Ohio & Erie Canalway,  The Ohio & Erie Canal was opened in 1827 between Cleveland and Akron, consisting of a manmade canal and system of locks for transporting people and goods, eventually connecting Lake Erie and the Ohio River.  Boats were towed by mules walking along a towpath adjacent to the canal.  The Ohio & Erie Canal was vastly important in the westward expansion of the US.)
Our purposes in visiting this area of northern Ohio were to escape the sweltering heat in Arkansas and begin conditioning for a late October bike ride across Missouri.  With temperatures in the mid 70s, and anxious to cycle, we unloaded the bikes at Peninsula, a quaint village about midway of the CVNP, and rode upstream (south) to Botzum, 6.7 miles.  Along the way, we saw and photographed several old lock chambers. 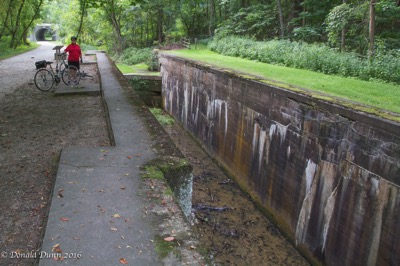 We stopped for a rest break about midway at Hunt Farm and noted Szalay’s Farm Market across the trail; what a find!  It was packed with people shopping for fresh fruits and vegetables and eating roasted corn on the cob fresh from the field. 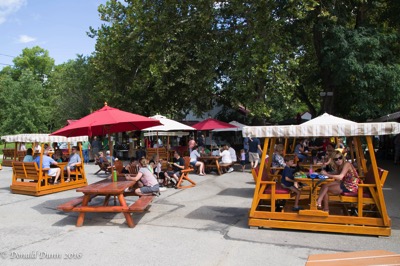 Continuing to the day’s terminus of Botzum, we saw more old lock chambers before turning around and riding back to Hunt Farm. 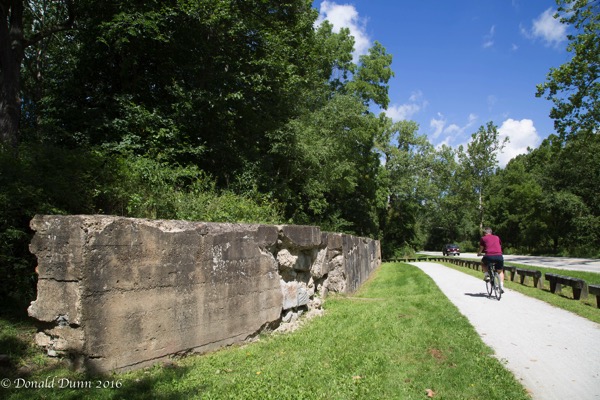 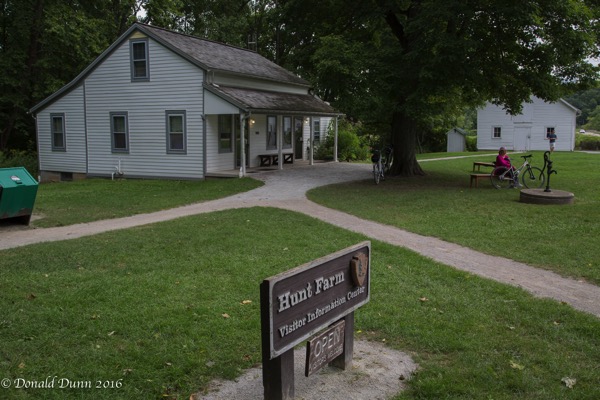 Kay opted to quit for the day, and I rode on to Peninsula to the car, driving back to Hunt House to pickup Kay.  She had used the time to eat ice cream at Szalay’s.  On our return to the Vacation Rental by Owner (VRBO) apartment, the “Electrical Charging System” failure light came on in the 12-year old Expedition.  We unloaded the bicycles at the apartment, and drove to Walmart for an electrical system check and possibly new battery—the battery was okay, but something else was wrong—I suspected the alternator. This means a trip to the Ford dealership tomorrow morning.  Back at the VRBO, it was showers and bed.