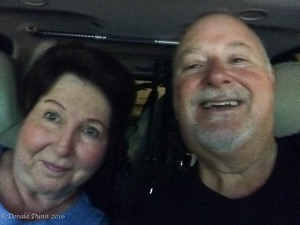 We were up early Friday morning, finished last minute packing, locked up the house, and hit the road.

Kay was coughing and had a scratchy throat, suspecting an upper respiratory infection or allergies.  It rained almost all the 530 miles to Elizabethtown, Kentucky, our overnight destination. 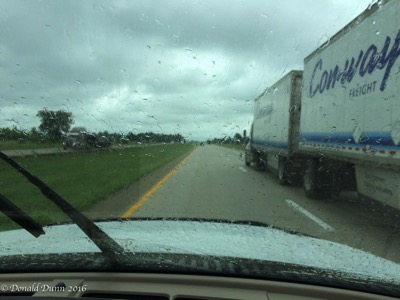 The drive through Kentucky, from the southwest to the central north, proved to be relaxing as the Purchase Parkway was surrounded by forests and cropland, and in very good condition. To our surprise, we had crossed the time boundary, and were now on Easter Daylight Savings Time.  Kay’s conditioned worsened during the day, identifying it as an upper respiratory infection.

Our original plans were to depart Elizabethtown and drive to Cincinnati for a brief visit with Kay’s nephew, Greg, and his wife and baby, Sunny and Carter.  However, Kay’s infection continued to worsen and not wanting to infect Greg, Sunny, and/or Carter, she opted to delay the visit until another time.  Before we left Elizabethtown on Saturday morning, she bought a bag full of over-the-counter remedies.  We drove through Louisville before rain struck again, but it ended before Cincinnati, and while cloudy, it did not rain the remainder of the day.  As we drove through Columbus, we veered off the interstate, driving to Millersburg in Holmes County, Ohio.  Holmes County is the center of Amish country in Ohio, one sixth of the world’s population of Amish live in Holmes County and surrounding areas, and the largest population of Amish in the world live here.  Interesting enough, we saw few Amish farms, or even Amish buggies driving on the “main” roads.  We drove through Millersburg to Berlin, having lunch at one of the notable restaurants in the area.  It was just okay, and not quite as good as the Amish restaurants in northern Indiana.  We’ll return and try another eatery in a couple of days.  After lunch, we were both tired from the drive, and Kay was especially tired having slept little the night before because of coughing.  We arrived at the Vacation Rental by Owner (VRBO) in Norton, Ohio, about 4:15 PM, and Kay immediately fell asleep; I followed after unloading the car and bicycles.  We took it easy the rest of the evening, going to sleep early.