It didn’t take long to get back in the routine of spending winter in the Rio Grande Valley.  And, the rain and cold weather upon our arrival helped as we were able to recharge our batteries. 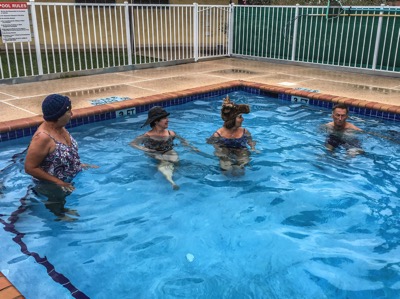 New Year’s Day was uneventful as we stayed in the RV most of the day because of cool and wet weather.  Kay ventured out long enough to photograph the Polar Plunge, but only 4 brave souls participated; I had planned to, but had already been in the hot tub in the morning!

Saturday afternoon we ventured out to the Ranch House’s new location with Al, Sharon, Chuck, and Sue, and their burgers were just as good as always., though too much red meat for the health conscious.

Up early Sunday morning, we attended church, and, since it’s our fifth year there, felt like home—same pastor and same music leader.

While Kay was off to exercise Monday morning, I joined Al for golf at Los Lagos Golf Course in Edinburg, my favorite in the Valley.  The fairways were green, and the greens were fast and consistent.  We played Court Whist in the evening, though neither of us did well.

No activities were planned for Tuesday, but the weather was good for a bike ride, though a little cool.  Chuck and I road the “Roadrunner” Trail comprising an almost 9 mile route, and true to form, we spotted a couple of Roadrunners.  We made our first visit to Costco, purchasing food and other items not readily available at home.  Kay visited the “beauty” shop in the afternoon and got a really short haircut; the stylist began talking about her new expected grandbaby, and clipped right through the conversation!  Tuesday night is game night here in Bentsen Palm Village RV Resort (BPVRV), and along with Al and Sharon, we played bridge. I drew good cards and had great partner fits, ending up with high score for the evening.

Wednesday was golf at Meadow Creek, my least favorite course in the Valley.  The fairways are sparsely sodded, and the greens are uneven and inconsistent, though better than last year—excuses for a bad score!  Kay, Loretta (former neighbor from Norfork), and Sharon spent the afternoon viewing the new Star Wars movie.  Back at the resort, it was “Margarita Night” though neither of us attended.

Kay and I went different directions again on Thursday.  Chuck and I bicycled the “Roadrunner” trail again—8.9 miles in 1:03 hours—and it proved to be quite fortuitous as we say two roadrunners, one javelina , and one Bobwhite Quail.  It was the first javelina and quail we’ve seen on this trail.  Kay went to the Swedish weaving class only to find out she had to remove a whole line of weaving she had done previously.  This is her fourth project, and the other three looked fantastic.  It was game night, and Sandy Muscat joined us for bridge.  With 5 players, we alternated playing hands. The cards were not so kind.