The Czech Republic is another landlocked country in Central Europe, bordered by Germany, Slovakia, Austria, and Poland. It was part of Czechoslovakia from 1918 following the collapse of the Austro-Hungarian Empire at the end of WW I.  It was occupied by Germany during WW II, and liberated in 1945 by U.S. and Russian forces.  Shortly thereafter, Czechoslovakia became a Communist party state, and after an uprising in 1968, was occupied by the Soviet Union until the collapse of the Communist bloc in 1989.  In 1993, it peacefully dissolved into the Czech Republic and Slovakia, though citizens were never given an opportunity to vote.  Though democratic only 26 years, the Czech Republic with a population over 10.5 million people is significantly developed with a high income economy, and high living standards.  I would be remiss not to mention the murder of about 80% of the Jews living in what is now the Czech Republic in Nazi death camps.  Many of the remaining moved away, and only about 5,000 pa what was once a population of over 100,000.  I am afraid that neither our kids nor grand kids will know or understand the horrors of the Nazis or of the KGB of the Communist bloc (wasn’t Putin a high ranking KGB official); our guides in Slovakia, Hungary, and the Czech Republic—all women—made it abundantly clear to us. 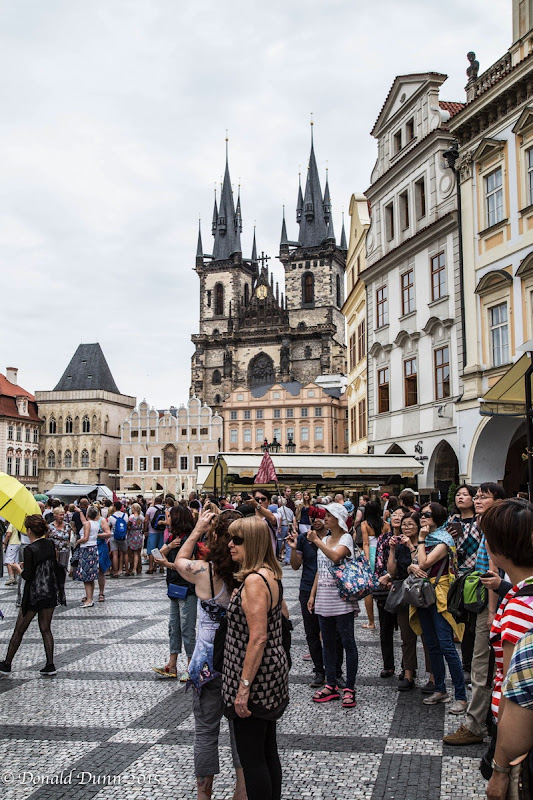 Prague is the capital of the Czech Republic.  It has a population of about 1.25 million people, and has the lowest unemployment rate in the European Union.  It perhaps is, and has been for 1100 years, the economic, cultural, and political center of Central Europe. At one time it was the home of two Holy Roman Emperors, and thus the capital of the Holy Roman Empire. Prague survived much of the destruction and devastation experienced in other European cities, so many of their historic structures remain.  Consequently, its large historic center was named an UNESCO World Heritage Site in 1992.

Meeting  Sue and Chuck in the lobby after our arrival in Prague Friday afternoon, we all walked to the “new” town square.  It was a lively, crowded place filled with people, street musicians, sidewalk coffee houses and cafes, and even a protest march.  We enjoyed good Czech beer at one of the beer houses, and Kay and Sue each had a great Czech sausage with mustard, onions, and kraut from one of the sidewalk vendors.

After an unpleasant breakfast at the hotel—both the food, including scrambled eggs and sausage, and coffee were cool—we joined other Viking customers for a 4-1/2 hour walk/bus tour of Prague. We walked through the Old Town Square, Prague Astronomical Clock, Jewish Quarters and Old Jewish Cemetery, across the Charles Bridge to the Lennon Wall where a bus took us past the largest arena in the world seating over 250,000 people to the inner courtyards of Prague Castle where we briefly toured the inside of St. Vitus Cathedral.  Though not empty, the streets of the city were much less crowded than they were as the day wore on.  In fact, the inner courtyards of Prague Castle were “packed”.  Our guide was the best yet; she was knowledgeable and articulate, and the pace of the tour was perfect, even timing the chimes of the astronomical clock correctly.  She had visited the US many times, guided for the U.S. Embassy, and spoke first hand of living under communist oppression. 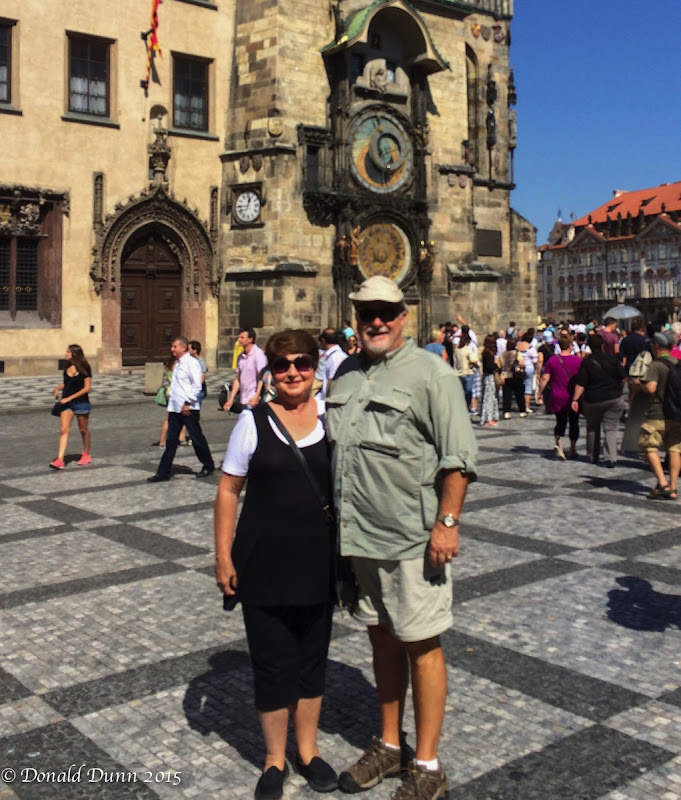 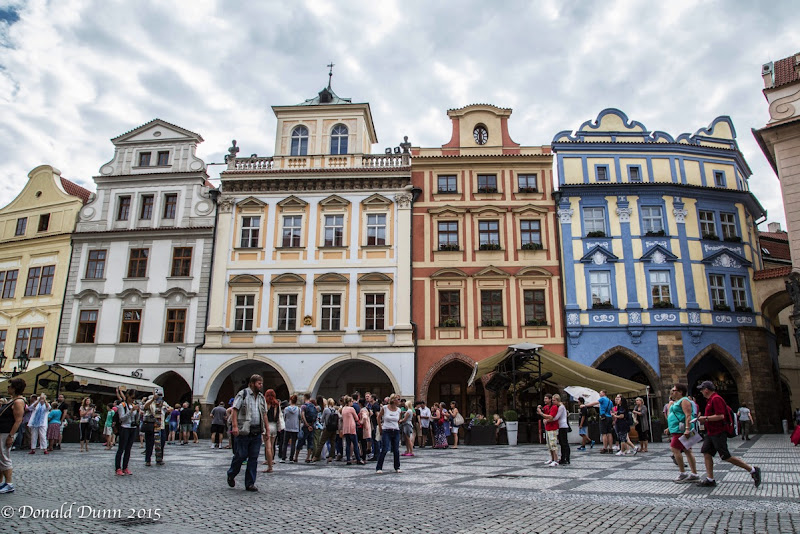 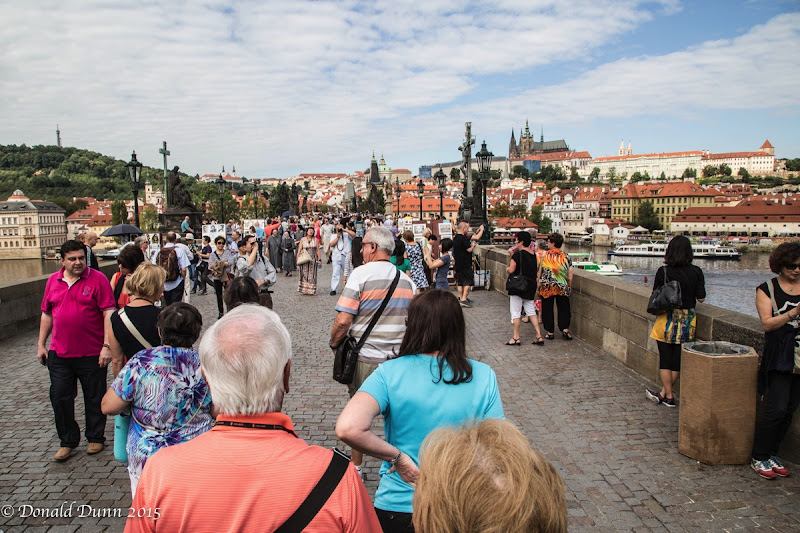 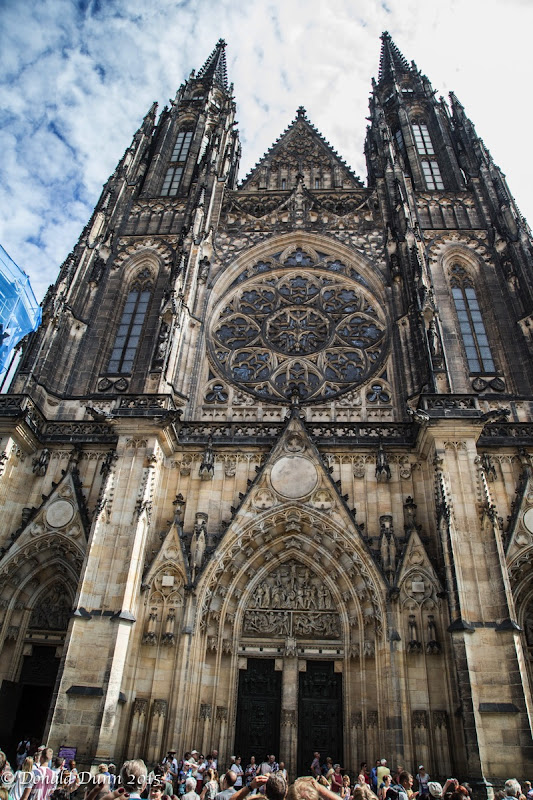 We rested the remainder of the afternoon before meeting Sue and Chuck for a walk to Old Town Square where we ate a sausage prepared in one of the many outdoor kitchens lining the streets.  We then walked to the New Town Square, enjoying street musicians and other sights and sounds along the way.

Sunday was a free day, and allowed for a lazy morning.  Once again, breakfast at the hotel was less than satisfactory.  Along with Sue and Chuck, we strolled the streets back to New Town Square with Kay and Sue shopping along the way, then to Old Town Square, and then back New Town Square for a Czech sausage on a bun with catsup, mustard, kraut, and onions.  Segways are everywhere, and a nuisance.  Worn out, we returned to the hotel for rest and relaxation. 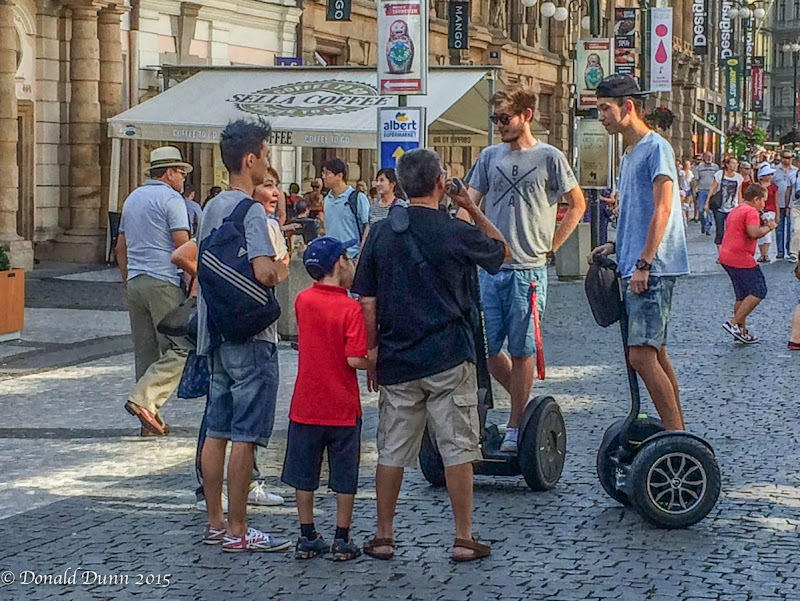 People watching was a hoot.  Prague is a very cosmopolitan city, filled with people from every corner of the globe.  Here, we saw more Asians and more Muslims than anywhere on the trip.  Everywhere we went we saw hordes of young people.  In Prague, more than any other city we visited, a high “jiggle” factor was observed.  It seems like the women, both young and old alike, wear bras that provide little support!  And no slips or lined garments appear to be worn as one can’t help but notice scanty panty lines under the tight skirts, pants, and shorts!  Perhaps it’s the close proximity to Paris, but we have not seen this elsewhere.  And for you women, there are more than a few tall, lean, and strong looking young Czech men roaming the streets.  All looked like college basketball players, but the ones I spoke with preferred boxing. 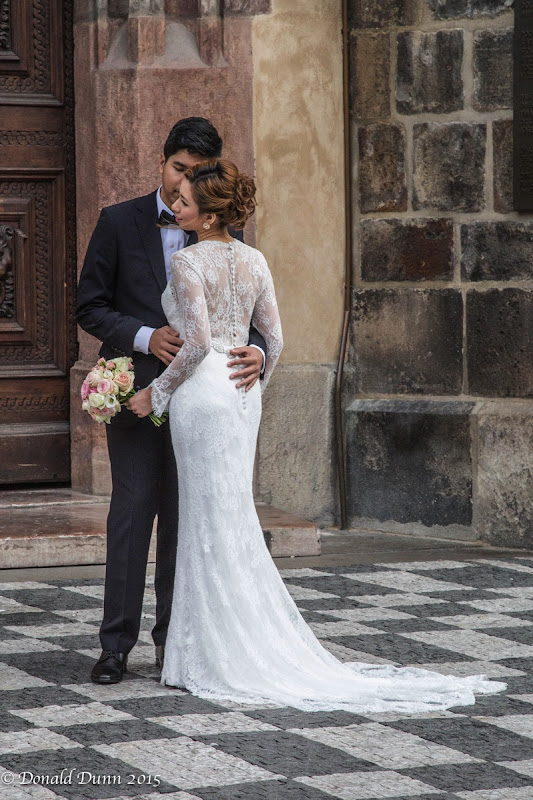 KAY’S TAKE:   Friday evening we walked a few blocks from our hotel to the new city center.  Lots of shops, lots of outdoor cafes/beer gardens.  We strolled several blocks, taking in the sites, window shopping, etc.  then we saw our friends, Chuck & Sue.  We sat with them and drank Czech beer and ate a Czech sausage.  The people watching was great.

Saturday morning we took Viking’s Prague city tour and it was fantastic!  What an incredible old city.  Beautiful structures everywhere you turned.  I felt like I had been transported back to the 1500’s.  It’s an old city preserved but repurposed and enjoyed by this century.  The crowds can be somewhat overwhelming sometimes.  We walked for almost 4 hours – saw the astronomical clock (amazing) the Jewish Pogram & cemetery, many cathedrals, the opera hall, the old new synagogue, the Charles Bridge, and the Prague castle and St. Vitus’ Cathedral.  Our guide, shown below on the left, was perhaps the most interesting and knowledgeable yet.  Fantastic!  She often guides for the U.S. embassy. 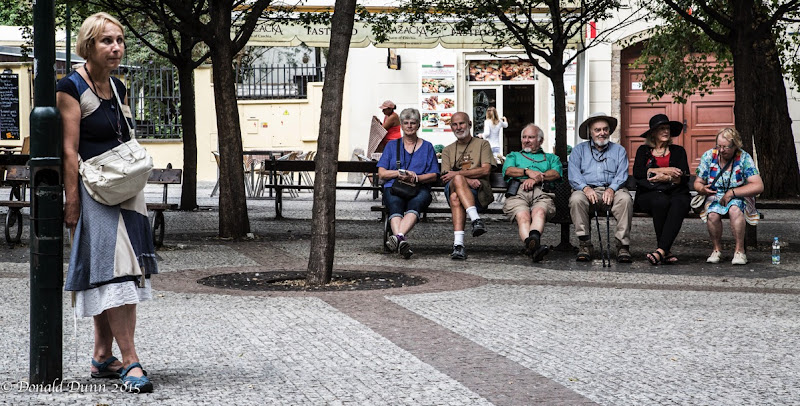 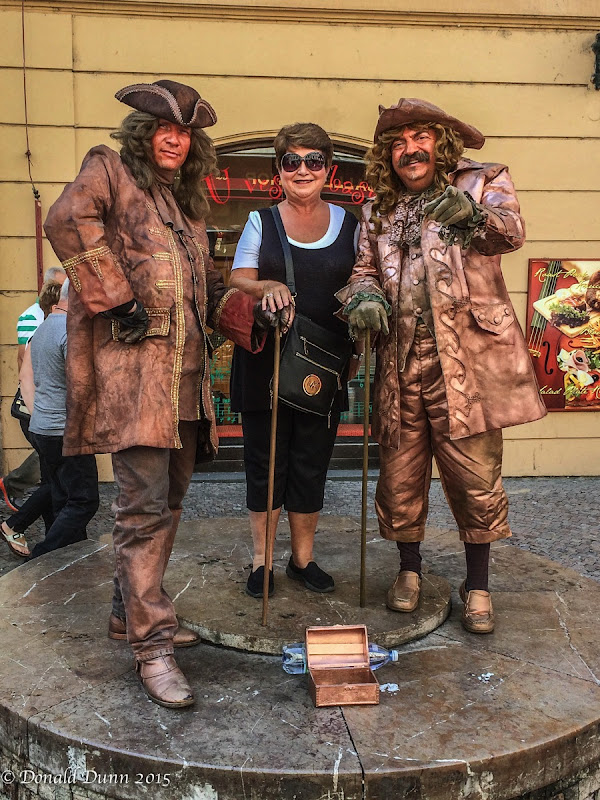 We did the same Saturday night except in the old town market.

Sunday morning we slept a little later and again tried the breakfast buffet.  I did find the omelet station.  Mine was as bland as can be imagined even though I asked for tomatoes, mushrooms, onions, & cheese.  It tasted more like an egg white omelet or perhaps an egg from an anemic chicken.  Coffee was warm, but again the cappuccino was Luke warm.  A mediocre buffet offering, to be sure.  We walked the old town again with the Mercers, shared several dark beers, shopped or mostly window shopped, and ate a Czech sausage roll.  The day was sunny and quite warm – I suspect near 90*.  There were three street musicians dressed up in leather pants, shirtless, singing and playing ancient looking pipes.  They looked and sounded like ancient Moguls or something.  Very good and entertaining.  A festival for children was going on near the new square.  School is starting this week, so this is the last weekend of their summer holiday.  Lots of families out today.  Many Czech women, young and older, don’t appear to wear bras.  More bouncing than we normally see.  LOL.   Amazingly, we see the exterior of a large grand old building and it’s been repurposed inside into many modern, chic, upscale shops, as in an inside mall.  There are dozens in walking distance of us.  Oh, yes, we saw a super market sign a block from us and at first we couldn’t find it.  Donald noticed a directional sign pointing down to the subway.  That’s where the grocery store was!  Get off the subway and stop for groceries on your way home!  Who knew?

These Europeans love their outdoor bistros, patios, and beer gardens.  They don’t appear to have air conditioning in many of the restaurants, and at least outside they have the chance of a breeze.  People watching is a major activity.  There are people here from countries all over the world.  It’s a microcosm – perhaps all great cities are.  Any way, we have loved Prague!  Can’t imagine how awful it must have been for them under communist rule; but they’ve been independent for 25 years now and their economy appears to be doing quiet well.  And Tourism isn’t in the top three!

Well, it’s our last night in Europe.  We fly out around noon tomorrow (August 31), fly to JFK, then Atlanta, then LR.  We get in very late – we’re staying in a hotel near the airport and then good friend Pam will transport us home.  Tired puppies, I’m sure!  It’s been a trip of a lifetime.