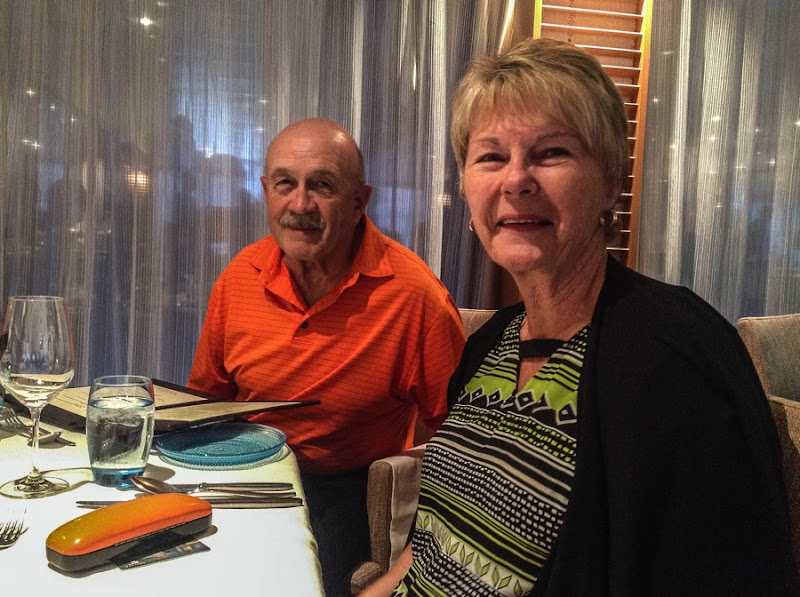 This morning we said goodbye to new friends Sid and Karen and to the wonderful Viking Gefjon staff; meeting and visiting with Sid and Karen was a highlight of the trip.
We boarded a bus for an almost 8-hour ride to Prague.  The bus was comfortable enough, hut the tour guide and two bus drivers talked constantly, and proved quite annoying, as we were provided very little information about places along the route.  Also, the “rest” stop was at a service station, and 7 other tour buses stopped as well–talk about crowded conditions!  And, lunch (on our own unbeknownst to us, was at another service station ill prepared for the crowd.  We had chicken schnitzel and chips, the only food we recognized.  Again, our guide was of little assistance.  As we drove through Hungary, Slavakia, and the Czech Republic, we were struck by the occasional conglomerates of very plain “faceless” high rise apartments dotting the otherwise mostly rural countryside.  It was a side of Slavakia, and Bratislava in particular, of which we had not been informed, perhaps unintentionally, when the Viking Gefjon stopped there earlier in the week.  The seemingly endless rolling hills of sunflower fields, with occasional corn fields scattered about, reminded us of South Dakota.  And, as we rode further north in the Czech Republic, “deer” stands abounded, and they were exactly like those familiar to us in Arkansas.
We arrived at our hotel in Prague, and thankfully were the first to check-in.  Our room, with two 3/4 beds, was quite spacious, except for the bathroom, which was handicap enabled; the bathroom itself was large but the shower was minuscule, particularly for a big ol’ boy like me.