Changing time zones again—from Central to Eastern to Central to Mountain—we were up earlier than everyone else. Breakfast consisted of items from the food bar at the hotel in Pueblo, Colorado. 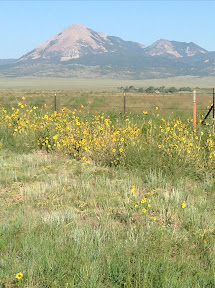 We drove south to Walsenburg, then west to Great Sand Dunes National Park. Yellow wildflowers covered each side of the road long the way, and made for a spectacular drive. The dunes looked so small from afar when compared to the mountains behind them. However, they loomed larger and larger as we drove closer. The Visitors Center was small, and provided the usual National Park Service information including a map and seasonal newspaper. 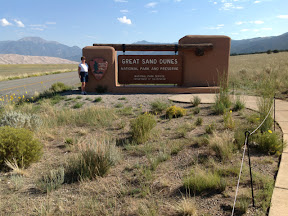 Leaving the car at the Dunes parking lot, we walked through powdery sand to the base of the dunes, took some photographs, and returned to the car rather than try to climb any of the dunes.

We continued driving west to South Fork, and began to notice evidence of the fires from earlier this summer. From South Fork we drove towards Creede, passing by the entrance of the 4UR Ranch, thinking of our good friends, Ed and Linda, who typically go there every summer.

Past Creede we saw a stopped vehicle along the road and immediately saw a moose cow and calf munching on low hanging leaves along the road.  Their eating was unaffected by us observers on the roadside.

From there we drove over two passes that exceeded 10,000 feet in elevation, before reaching Lake City. Driving north to Gunnison, and then east over Monarch Pass at 11,312 feet, we arrived in Salida about 6:30 PM. Finding a decent restaurant proved difficult, so we checked into the hotel, and drove a short distance to a local Mexican eatery recommended by the hotel owner.

The rest of the evening was spent recovering from the long day.