This year we had an opportunity to include a fly and drive trip to Colorado, allowing us to do another life list item.  We left home about 8:30 AM, driving to North Little Rock, where friend Betty took us to the airport. 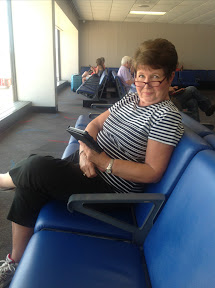 Our non-stop United Airlines flight departed on time and arrived in Denver about a half hour early. After picking up the checked baggage, we caught a shuttle to the Advantage Rental Car; after confirming the rental a few weeks ago, we read the most horrific reviews regarding Advantage we had ever seen. Consequently, we were very cautious when actually signing the agreement. And, true to the negative reviews, we found long lines and waiting times, the partially-English-speaking employees trying her best to upgrade us beyond what we had asked for, and would not take no for an answer. Nevertheless, we made it through the process relatively quickly, with no additions to our bill, checked car, and loaded our luggage.

There was extremely poor signage exiting the airport, and we wanted to avoid toll roads, as unbeknownst to us the rental agreement included a tremendous charge for electronic tolls. (We’re still not sure that we avoided toll roads, but will find out when we settle up our final bill.) As luck would have it, we began driving south about the same time rush-hour struck the Denver metro area. The combination of rush-hour and construction caused traffic to back up for about an hour between Denver and Colorado Springs. The drive from Colorado Springs to Pueblo was much less stressful, with very little traffic, Though construction activities played havoc with our drive.

We ate dinner at Cracker Barrel, a very reliable restaurant, during which friend Joey called regarding our recent Wisconsin and Michigan trip. Sometimes I underestimate the power of the written word, and have had several comments from people who read the blog who say that they can very easily tell when we like an area, or even dislike an area.  Such was the case for Wisconsin—while we did not particularly care for Copper Harbor, the UP, or Mackinaw City, we really liked Door County, Wisconsin, and Petoskey, Charlevoix, and the Traverse City areas of Michigan; we hope that doesn’t overly influence others who might want to visit those places.

After dinner, we checked into the hotel and called it a night.