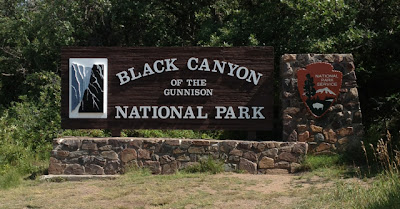 Different town, different hotel, and different bed equals no sleep. Consequently, it was another early morning, enabling us to leave the hotel early.

We drove west, over Monarch Pass at elevation 11, 312 feet.  Monarch Pass is located on the Continental Divide at the southern end of the Sawatch Range, approximately 25 miles west of Salida, our home away from home for the next 4 nights.  The pass can be used by all vehicles under most conditions, with some 7% grades, and is generally open year-round.  It is widely considered one of the most scenic in Colorado, offering a panoramic view of the southern end of the Sawatch Range from the summit.

After descending Monarch Pass, we drove through the town of Gunnison, and continued west past  Blue Mesa Reservoir, a beautiful man-made reservoir. It reminded us of Lake Powell in Arizona, with sheer rock walls and beautiful blue water.  From there, we traveled further west to Black Canyon of the Gunnison National Park.  I last visited Black Canyon of the Gunnison NP in the late 1970s, and it was a very quick “take a picture and drive” type of visit. This trip was different—Kay and I hiked every trail to every overlook, totaling well over 3 miles, and at an elevation of 8,500 feet!  Regrettably, photographs, at least those I take, do not do it justice.

The area was established as a U.S. National Monument on March 2, 1933, and made into a National Park on October 21, 1999. The trails and overlooks, and all other infrastructure for that matter, were among the best of any national park or monument we’ve visited.

The Black Canyon is over 2,700 feet at its greatest depth; its narrowest width is 1,100 feet at the rim and only 40 feet at the river. While the canyon is 53 miles long, only 14 miles are within the national Park; the remainder lies under two impoundments, including Blue Mesa Reservoir mentioned above. Average descent over the entire length of canyon is 43 feet/mile, and the greatest decent is 240 feet/mile.

As we were leaving the park, we saw a mule deer doe eating along side the road, getting ready for fall and winter.

We were pooped and hungry after all the hiking, and drove to Montrose for a late lunch/early dinner. Montrose is a much larger city than what we expected, comparing with Jonesboro, Fayetteville, etc.

A long drive back to Salida, over Monarch Pass, got us to the hotel just before dark, where we were greeted by a couple of mule deer fawns munching nearby.