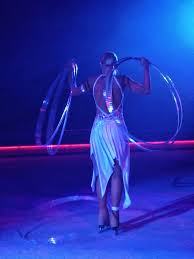 After a non-eventful morning, we attended the ship’s “Ice Dancin’ Spectacular”, featuring a hula hoop act, Ekaterina.  The skaters were from all over the world, and were good, perhaps just below Olympic level, except for the star, Katerina, who was exceptional.

With plenty of afternoon left, we enjoyed some sun time.  The hot tubs were packed with pre-teens and teens, leaving little room for anyone else.

There are lots of kids on this cruise, from toddlers to teens; after all, it is spring break time and we have to remember this cruise is mainly for Kaden, and he’s in “heaven” with all the cute teenage girls largely outnumbering the boys.

The entertainment tonight was a tribute to Broadway, “Now and Forever”, complete with a 7-piece orchestra and singers and dancers. The show featured numbers from The Producers, Fosse, Mamma Mia!, and many more. A couple of the singers were just ordinary with little range, making the show just okay.

This is our first cruise on Royal Caribbean. Naturally, we are comparing it to Celebrity and Norwegian, other lines we have used.  The clientele are a bit more affluent than what we observed on Norwegian (interesting, since most are from Arkansas), and there are fewer non-Americans than on either Celebrity or Norwegian. Otherwise, at this early point both the food seems to be about the same and the entertainment seems to be slightly below the level of the others.  Consequently, the verdict is still out on Royal Caribbean.

My intent was to relax on this cruise, and I am succeeding, having finished yet another book.