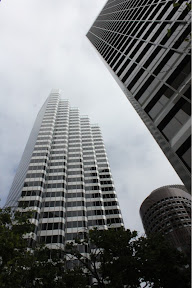 Visiting San Francisco is also a bucket-list item for us, so today we did a whirlwind tour, hitting all the high spots and eating at both Fisherman’s Wharf and in Chinatown. We also managed to "kill two birds with one stone" by returning the rental car to the airport in the process. After dropping the car off, we caught the airport tram to the Bay Area Rapid Transportation (BART) station for our 30-minute ride to the city.

We exited the BART at the Embarcadero on Market Street in the financial District of San Francisco. It was the first time we had been among high rises and skyscrapers since before retirement. A requisite stop was made at Starbucks for a bathroom break and coffee; there was a Starbucks about every half block! From the Embarcadero, we walked to the waterfront, hoping to catch public transportation to Pier 39, but the bus was bulging with passengers, some even hanging out the door. 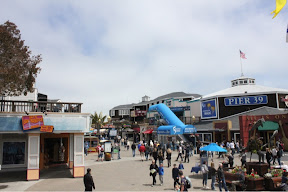 So, we continued walking the rest of the way to Fisherman’s Wharf.

At Pier 39, we bought tickets on and boarded an open-topped Grayline Tour bus for a two-hour tour of San Francisco. We have found that in a city new to us this is the best way to see the highlights, and get a brief history along the way. We rode Ghirardelli Square–home of the great Ghirardelli chocolate, the Cannery–home of Del Monte Canning Company, Lombard Street-the most crooked street in the US, Little Italy, Chinatown, the Tenderloin District—one of the few unsafe places in the city, Nob Hill—where the rich and famous live, through Golden Gate Park, and finally to the Golden Gate Bridge, which is celebrating its 75th anniversary this coming Sunday. 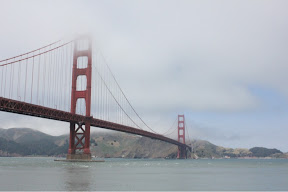 During the brief stop at the bridge, Kay and I hurriedly walked to the cabled span over the water, feeling the bridge bouncing up and down. 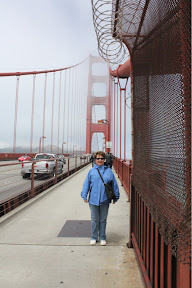 We rushed back to the Grayline bus, finishing the tour and returned to Fisherman’s Wharf.

Cold and famished, we stopped at the Boudin Sourdough Bakery for lunch; Kay had crab tortillas and I had clam chowder in a sourdough bread bowl with a Caesar salad. I didn’t finish the bread bowl and shared with both Kay and George. 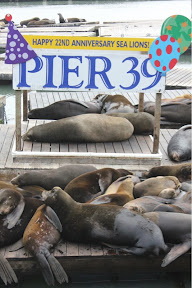 We spent some time seeing the sights of Fisherman’s Wharf, including the famous sea lions.

We then began the long walk to Chinatown. We walked the entire length of Grant Street in Chinatown, stopping to window shop at some of the more interesting stores along the way. 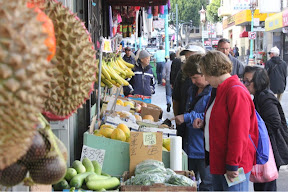 Their grocery and produce stores were fascinating, including whole cooked chickens hanging by their heads, and many kinds of produce we had never seen. Wanting to eat something in Chinatown and perhaps see it at dusk or dark with all the attendant lights, sounds, and smells, we returned up Grant Street to the famous Empress of China restaurant for appetizers. They wouldn’t let us eat in the dining room–it required a $60 minimum–so we ate in the bar near windows overlooking the area–6 floors up and probably the best seats in the house.
We walked down California Street back to the financial district and caught BART back to the airport where we caught the hotel shuttle to the hotel. They fulfilled their commitments to provide us with different rooms, and had moved our luggage. We said goodbye to Nan and George, replaced our bags for the return flight home, and made it to bed at 11 PM for our 3:15 AM wake-up call.

Getting to see and briefly tour San Francisco was a real treat, and we’d like to come back, maybe in late fall some year, and spend a few days.