Kay and I celebrated 18 years of marriage on Sunday, September 2; it’s been a great 18 years, too. Tim and Rosie, friends from the Rio Grande Valley visited after church, and we reminisced about old time and talked about future plans.

We played golf together in the Hot Springs Village Duffers annual member/guest scramble—I played poorly—and celebrated the winners at a cookout a couple days later.

Those clubs and organizations which took a hiatus over the summer have begun meeting again; for me, it’s the Camera Club and the VMUG (Village Mac Users Group—all things Apple).

In early September, we began to see a significant increase in the number of Ruby-throated Hummingbirds at the feeders, a sure sign that migration is in full force. And then on the 11th, a leucistic female Ruby-throated Hummingbird showed up. Though not as rare as true albino hummingbirds, leucistic hummingbirds are still rare but are seen more often than true albinos. Like “normal” hummingbirds, leucistic forms have black eyes, feet, and bills, but their feathers may be pure white, buffy, tan, or gray instead of green or some other “normal” color. We enjoyed her for 7 days, almost to the hour, before she migrated south. 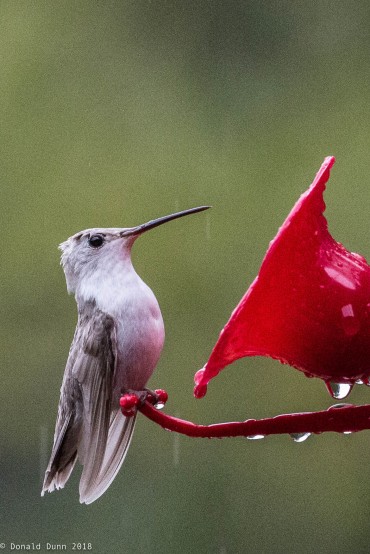