Skip to primary content
Berlin proved to be a more interesting city than we had imagined.  We expected to see remnants of the divided border city separating West Germany and East Germany—and we did see Checkpoint Charlie and a small section of the Berlin Wall.  However, the new Berlin is a modern, cosmopolitan city filled with young people and new construction.  Most residents downplay the division between West and East Germany, and the historical monuments mentioned above. 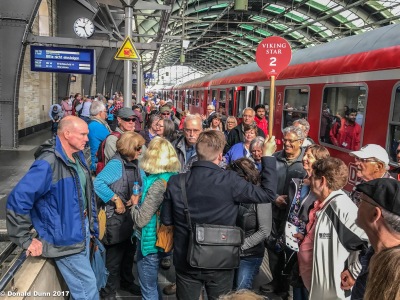 Our excursion included a 3 hour train ride each way from northern Germany coast, my first modern train ride.  During the tour we saw most of the highlights of Berlin including the aforementioned remnants of the divided Germany, Germany’s Parliament building, the Brandenburg Gate, Museum Island with some 170 museums, palaces, churches, etc.  Berlin was devastated by bombing raids during World War II, resulting in a relatively “new” city, though the facades reflect the historical architecture.

On a more somber note, we spent time at the Holocaust Memorial for the Murdered Jews of Europe across from the US Embassy.

Our weather today was partly cloudy and 62°—delightful.  We found Berlin to be a fun city, with lots of excitement around every corner.