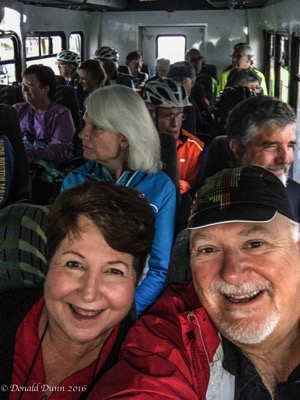 We were up early, dressed in close-fitting cycling clothes, with extra layers for warmth; there’s no way that cycling clothes make a pudgy man like me look flattering, in fact, just the opposite.  However the clothes are designed with a purpose in mind…  After a continental breakfast at the hotel, we loaded luggage in the trailer, and shuttled to the historic KATY Depot in Sedalia, also our trailhead for the start of the ride.  After an overly long lecture on the history of Sedalia and restoration of the depot, we anxiously checked our now unloaded bicycles, attached bike bags, water bottles, etc., inflated tires, and awaited the start of the first leg of the trip. 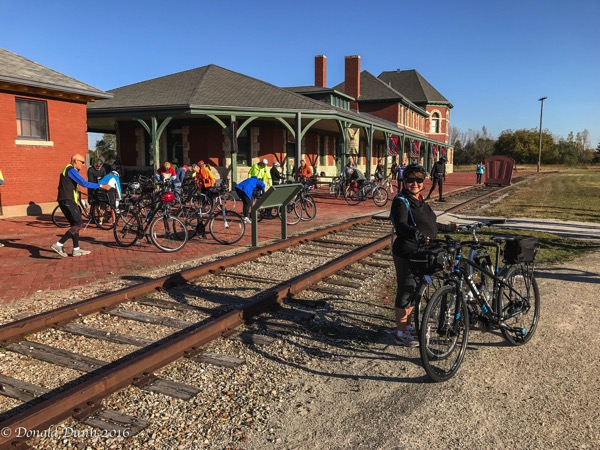 We followed the lead cycling support staff member, Rochelle, along the streets of Sedalia for a few blocks until we reached the actual KATY Trail.  (There were always three support cyclists riding with us:  one in or near the lead, one somewhere in the middle, and one at the end called the sweeper.  And, there was always a SAG—support and gear—van and trailer nearby.)  This first day’s ride was 36.8 miles with 912 feet of elevation change; my average speed was 9.4 mph.  Riding on crushed limestone is fine, but doesn’t allow for coasting, thus one is pedaling the entire time.  While I rode the entire leg, Kay “SAGGED” or rode the SAG wagon the middle leg; one of the great things about Road Scholar cycling trips is that you may catch and ride the SAG van at any of its stops along the way, usually about every 10 to 16 miles.  This first day’s ride did not follow the Missouri River, but took us through agricultural fields, forests, and several small towns.  The weather was cooperative, cool in the morning, and little wind. 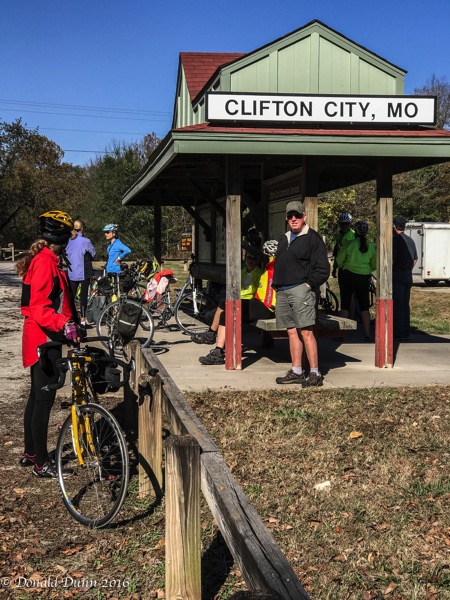 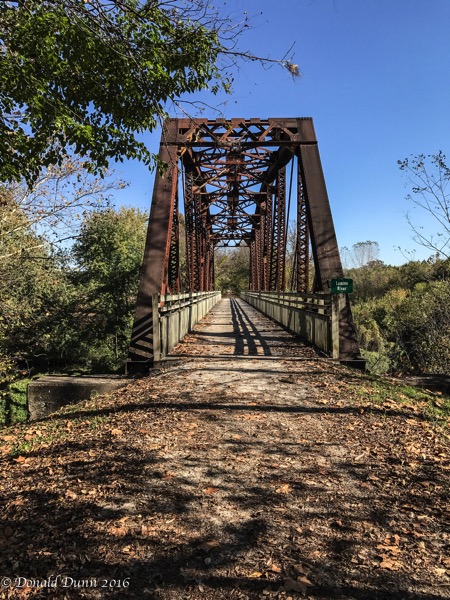 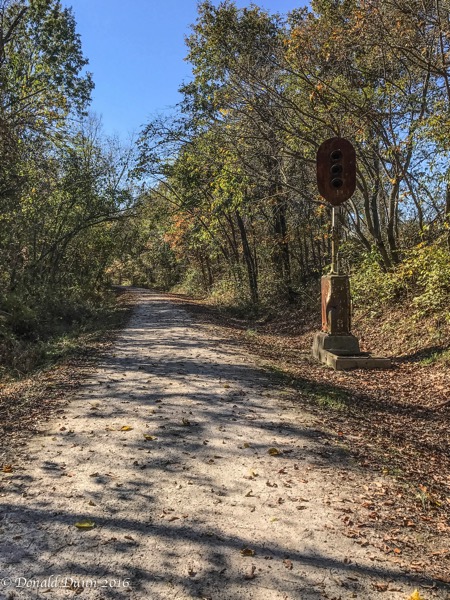 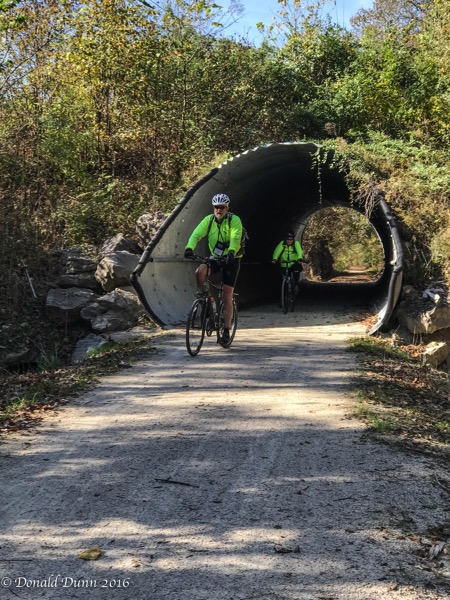 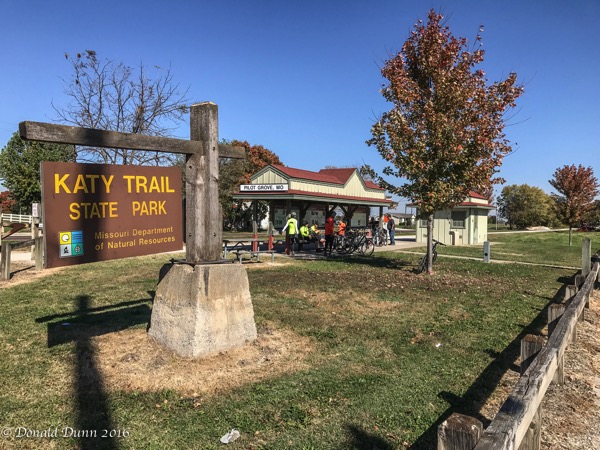 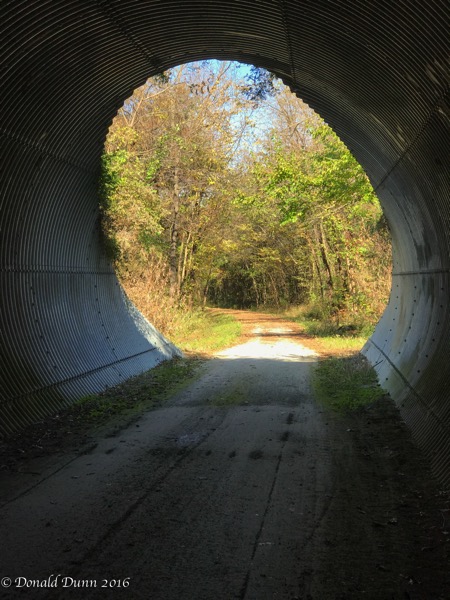 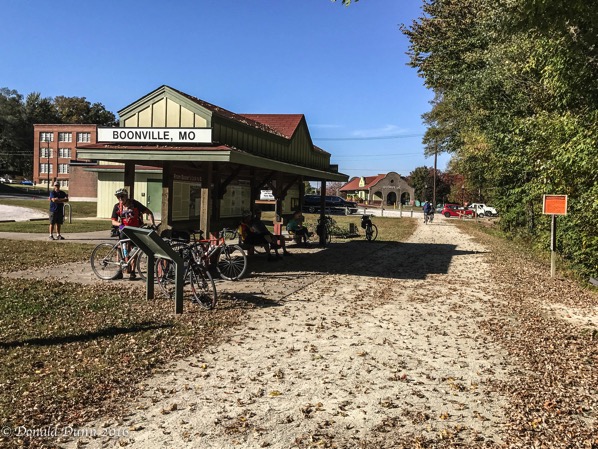 Despite the late start, 10 AM, we arrived at the Isle of Capri Casino in Boonville about 3 PM.  Most of the rooms were not ready, so we just hung around the lobby with luggage and bicycles in tow (Isle of Capri did not have a place for bicycle storage).  After checking into the room, again with bicycles in tow, we relaxed a couple of hours then had dinner was at the casino’s somewhat average buffet—one great thing about riding 38+ miles is that one burns a lot of calories (2,000+) and can eat just about anything!   Tiredness finally overcame us and we called it an early night. 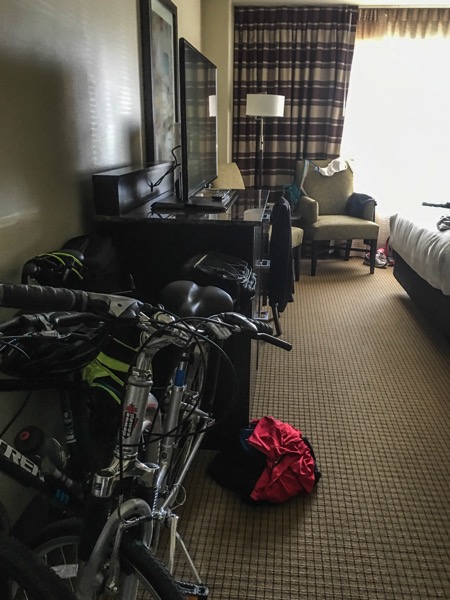