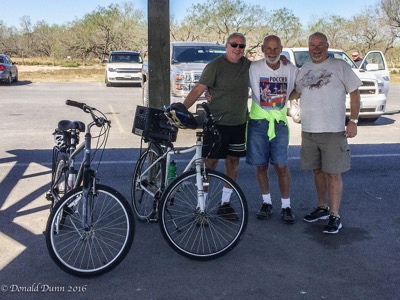 Sleep, this winter, has come easy.  Normally averaging maybe 6 hours a night, I am averaging over 8 hours a night, and Kay, too, is sleeping an additional hour everyday.  We can’t pinpoint a reason, but more than likely it is a combination of cool nights, a dark RV, and a relaxed pace.  Regardless, we both feel great.  In this same vein, a look at our calendar reveals lots of blank spaces.  We are being healthy selfish, doing what we want when we want.  For Kay, that means shopping when the mood strikes, though she rarely buys anything, Swedish weaving on Thursday afternoons, and an occasional foray to the palapa for happy hour.  For me, it’s golf on Mondays and Wednesdays, bike riding on Tuesdays and Thursdays, and an occasional trip to Costco. 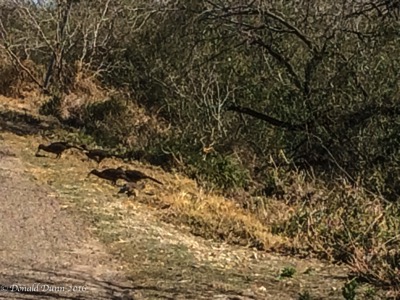 Our bike ride on Tuesday was notable in that Chuck, Van, and I rode the “Roadrunner Trail” (otherwise known as the Mission Park Bike Trail), and saw 9 Chachalacas and 7 Roadrunners, a record for each of us—and the trail was quite busy with other riders. (NOTE:  Chachalacas are found in wooded habitats in far southern United States, Mexico, and Central and South America.   They are about the size of a small pheasant, and have a loud, four-noted cackle.)

Wednesday was golf at Meadow Creek; that course gets to me!  It has narrow, often grassless fairways, with just enough water to cause havoc, and the greens are small and very rough.  I have difficulty hitting off of bare ground, particularly close to the greens, so the putter gets extended use off the greens.  I never score well at this course.

Thursday, because of heavy winds, Chuck and I rode through the Bentsen Rio Grande State Park, taking advantage of the tree-lined roads to shield the wind.  The bird park was crowded with people, and we later discovered that a fairly rare White-throated Thrush was frequenting the area.

We had a quiet weekend—no concerts, no golf, no shopping, no road trips—just hanging out around the motorhome, a bike ride, and church on Sunday.  On the Saturday bike ride on the Roadrunner Trail, Chuck’s bicycle exhibited a slight wobble in the rear wheel, and remembering a similar experience two years ago, suspected that it was the likely result of broken spokes.  Sure enough, we stopped at the halfway point, and found 3 broken spokes.  Upon arriving back at the RV resort, we took it to BikeMasters for repair and a general tune-up.

Kay ventured into Mexico on Monday, I played golf with Al and Eddie at Harlingen CC.  It is a nice course, but not in as good a condition as in previous years.  The greens had been patched and partially aerated, and were quite bumpy. 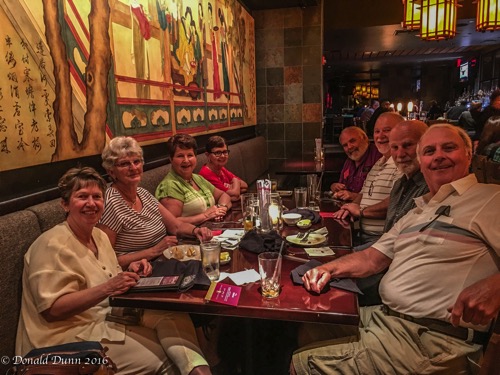 We retrieved Chuck’s bike from BikeMasters, and dropped off Sue’s for a general tune-up.  BikeMasters did a super job of repairing Chuck’s rear wheel, tuning the bike, and cleaning it.  We rode the Roadrunner Trail and added a segment around Meadow Creek for a total of 13.1 miles, our most for the season.  Tuesday night we celebrated Valentine’s Day with Al and Sharon, Chuck and Sue, and Van and Bonnie at PF Chang’s.  The evening was wonderful.

Golf was on the schedule again for Wednesday, while Kay drove to Wells of Weslaco for fittings for a fashion show in which she will model.

As an aside, we have really enjoyed visiting with Wayne and Loretta this winter.  They were our neighbors for 10 years in north Arkansas, and Wayne and I had coffee together almost every morning during that time and spent many hours and days together flyfishing the Norfork River.   We have really missed them.

With great weather and so many friends here in the Valley, we have reserved again for next winter.  It is truly a special place for us.