The Texas Crud struck on Thursday, January 21, with a slightly sore throat, light cough, and headache.  Should have figured it out because a birding outing was scheduled for South Padre Island and we had planned to participate; but something just didn’t feel right.  Kay kept the Zycam coming every 3 hours, but it didn’t seem to help, and as the day progressed into night, it became worse and was a full blown virus by next morning.  Saturday morning, I awoke feeling pretty good and figured this malady had been conquered.  We attended Rowe High School’s production of How To Succeed In Business Without Really Trying, and it was good, but a little long at 3 hours.  Saturday evening and night, the sneezing and coughing became more frequent, and a general feeling of wellness disappeared.  Sunday was a little worse, and then Monday, a check of my temperature revealed 102°, extremely high for me.  A call to and consult with former neighbor Wayne substantiated that the virus had likely turned into a bacterial infection, and Kay dug out the Z-Pac from Mexico; twelve hours later the fever broke, and in combination with the chicken vegetable soup brought over by Debbie Creagan, an RV neighbor, I was on the mend (this is the first time I have taken medicine purchased in Mexico).  Thus, for me there was no golf, no birding, no bicycling, and no butterflying, and I tired of reading and playing on the computer.
Kay, meanwhile, kept her social engagements, including cooking 3 pans of apple dumplings for the highly successful progressive dinner on Sunday.  Our area of the resort (Circle 3) was responsible for desserts, and the many desserts were all consumed.  On Monday, she shopped at Wells Clothing Store in Weslaco, her favorite store in the Valley, and on Tuesday, she attended the Magic Valley PEO group for winter Texans.  Wednesday, we drove to DonWes Flea Market to pick up “shade” screens for the hot tub area back home, Sam’s Club, and Costco.  After returning to the resort, I picked up Wayne and we drove to Harbor Freight to purchase a solar charger for the motorhome chassis battery.  Back at the RV, a repairman had come to check on the rear motorhome AC as it had ceased working.  I stood outside in the cool air, assisting the RV repairman; seems like we need a new control board.  While he was working on top of the RV, an Altimira Oriole perched in an adjacent tree and gave the repairman heck for several minutes.  The oriole’s mate joined him/her at Lorna’s hummingbird feeder, and all was well.  But for me, after all day on the run, I was exhausted, and Kay and I enjoyed a rare evening watching television—Australian and British mysteries on NETFLIX, of course! 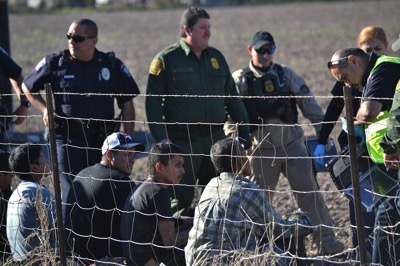 Thursday, with temperatures near 70°, I ventured outside in the afternoon to enjoy the sunshine.  It proved to be an exciting time as an SUV full of illegals overturned near the resort and one escaped.  He ran through the field, jumped the fence into the dog run, was chased by two dogs, jumped the fence out of the dog run, stole a neighbor’s bicycle, and was off, trying to find his way out of the circles!  And, the Border Patrol was chasing on foot, ATV, SUV, and helicopter. (Photo by David Muscat)  It was just like watching the Keystone Cops—quite hilarious.  After all the activity settled, I spotted a Yellow-headed Blackbird among a block of Red-winged Blackbirds in the tree next door, alerted birding neighbor, Lorna, and got some good photos.  There’s just too much excitement for all of us old people! 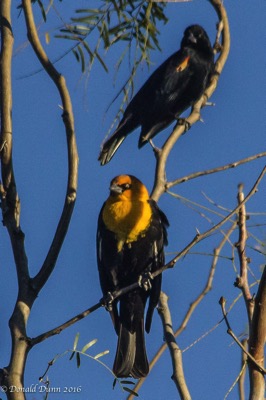