With the holiday over, we used Saturday morning to “deconstruct” Christmas decorations, and it sure took less time to deconstruct—3 1/2 house—than for Kay to decorate.  With the house back to normal and looking empty, we concentrated on getting the motorhome ready for travel to south Texas for our abbreviated winter there.  Most of the packing had been done prior to the holiday, and since we’re packing light this year, we lacked only last minute items.  When de-winterizing, a leak revealed itself above the the potable water pump compartment when the pump was activated.  Consequently, we didn’t know whether or not we would have water, without leaks, when hooked up to “city” water, and packed several gallons of water for cooking and flushing.  Also, we noted the chassis battery was weak (the motorhome has three batteries, two for the coach or house part of the motorhome, and one for the chassis, or engine and drive train part of the motorhome); oh well, it could be replaced upon arrival in the Rio Grande Valley since we could start the engine using the auxiliary start button (taking advantage of the coach batteries).   Also, three wireless security cameras were installed in the house. 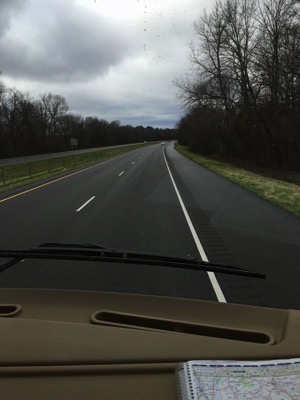 We delayed our departure until the forecast showed a low probability of rain 20% or less, and Monday morning the persistent rain finally stopped, or at least we thought.  We hooked up the Honda, and departed the storage facility, headed to Texas.  Just as we passed the gate exiting the Village, I realized my hearing aids were still in the house bedroom, so the motorhome was turned around, driven to the house, and the hearing aids recovered.  On the way back out, we passed friend Jim Passe who had drive over to say good-bye.  We pulled over, and exchanged good-byes, and were off for the Rio Grande Valley.  The first day’s travel was slightly less than 200 miles, all in a misting rain with 20-25 mph headwinds, as we stopped at Johnson Creek Campground, Lake O’ The Pines, Texas, about an hour south of Texarkana.  This is a US Army Corps of Engineers campground heavily used by locals, and they seem to occupy spaces even without reservations or paying.  Consequently, after being assigned a space, we found it to be occupied, and we drove around the campground with the motorhome 3 times before finally being assigned another spot.  Electrical connections were made and the hose was hooked-up, and voila, the leak did not appear—hallelujah and praise the Lord! 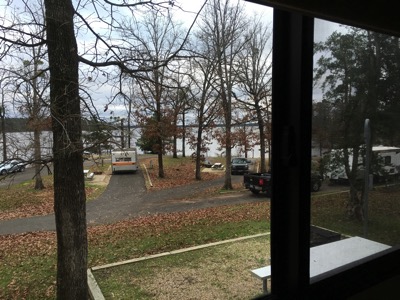 Our second day’s travel took us further south almost 300 miles with partly sunny skies and little to no wind.  We arrived just after noon at Colorado Landing RV and Mobile Home park at LaGrange, Texas.  We have stopped there many times enroute to and from the Valley.  Many of the RV sites were empty when we arrived but quickly filled as the afternoon wore on.  We had a late lunch at Las Fuentes Mexican restaurant near the RV park, and it was great; enough food was left over for another meal or two.

A light rain fell through the night, forcing us to load up for the final day’s travel in wet conditions.  The light rain and a slight tailwind continued throughout the day, otherwise the trip was uneventful.  Gasoline was relatively inexpensive for the trip down, as we payed $1.699 per gallon for 93 octane at one stop and $1.519 per gallon at Victoria, Texas.  Other prices were in the $1.70+ per gallon.  We arrived at Bentsen Palm Village RV Resort, our winter home, at about 1:30 PM, welcomed by all our neighbors in “Circle 3”.  It really feels good to be here, despite the cool, wet weather.