The last half of October was quite busy for us.  Kay has begun playing bridge once a month with a group of ladies, and mid-October was their playing date.  She really enjoyed the game, and as always, came out on top. 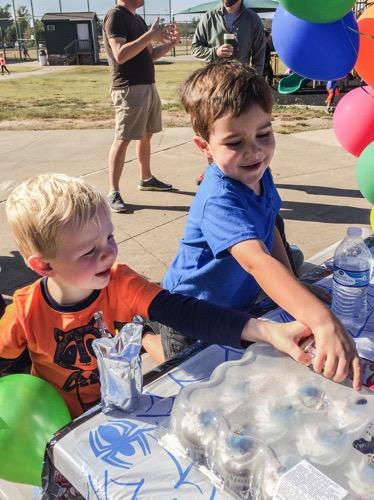 Continuing our family-filled week, we drove to Bryant on October 17 to visit with Kaden a day after his 20th birthday; he was home for fall break from college.  And then that evening, we attended a marriage celebration in Little Rock; it was at the Crowne Plaza in west Little Rock, and the food was fabulous.  Our final birthday of the month was Ridge’s; we returned back to central Arkansas for his 4th birthday party a few days early.  No more birthdays this month.
October 21, while Kay was at Bookclub, Jerry and Karen Smith, birding friends from Rio Grande Valley, stopped over for a few days on their way to the Valley from Wisconsin.  We had a great visit, and enjoyed showing them Hot Springs Village, Hot Springs, and the mineral mines west of the Village.  They invested in the area by visiting Oaklawn and Jerry found some coins at a local shop to add to his collection.
Upon checking on the motorhome, we were advised that the dash air conditioner had a leak and that it would require about $2,000 parts and labor to repair it.  I called good friend and former neighbor Wayne, and he volunteered to repair it this coming spring.  We sure miss him and Loretta, one of our few big-time regrets of leaving north Arkansas.  He was always available to help me with mechanical repairs, etc. 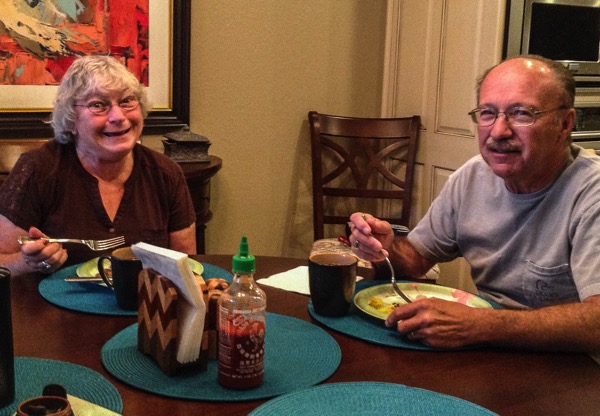 On October 23, we had our first substantial rain since early July.  Kay, Jerry, Karen, and I attended a fantastic concert at the Woodlands Auditorium. Ricky Skaggs and his 6 piece band, Kentucky Thunder, put on a really good concert.  Of course, he has won 14 Grammy awards.  The following morning, Jerry and Karen departed for the RGV,.  We had a really good visit, and look forward to seeing them in January.  Kay used the afternoon for a long shopping trip, and the rain continued.
The last Sunday of the month, we tried the new service—The Gathering—at Christ of the Hills United Methodist Church and really enjoyed the music and the preaching.  The service was rough around the edges, but spirit-filled.  Rain continued throughout the day.
Late in the month, I had yet another spinal injection, the third.  This time, I took it easy that afternoon.   Again, rain continued.
We picked up the motorhome from Russellville on October 27, almost 3 weeks after it was towed there for repair.  It was good to get it home, and in our driveway, though the drive back was a bit cautious wondering whether or not the brakes would work.  It barely fit on the driveway, with a couple feet to spare.  Rain continued.  With the motorhome back, we took advantage of a break in the rain, and winterized it for the first time since its first winter in 2011—we have been in the Rio Grande Valley every year before the first hard freeze, and didn’t return until the chances of freezing weather were slim.  We also discovered that the “house” batteries were dead, so we made a quick trip to Sam’s Club to get new batteries, and had them installed just after lunch.  After finishing with the motorhome, we hung suet from the deck bird feeding stations, and the squirrels immediately “found” them, but so did a few Carolina Chickadees and Tufted Titmice.  And then, it began raining, very hard, again.
Late in the month, Kay accompanied other women from church to the Holiday House in Little Rock, but only purchased a gift or two for Ridge and Harper.  After all the hoopla from the previous 4 weeks, life it beginning to return to “normal” for us.
Normalcy lasted only a day or two; on October 30, the University of South Alabama women’s golf team arrived in the Village to play in the Diamante Classic, and we hosted the team’s graduate assistant.  Members of the team are staying with host families in our neighborhood, and there are events planned each evening of the tournament.

Maybe things will settle down next month.  Yeah, sure!