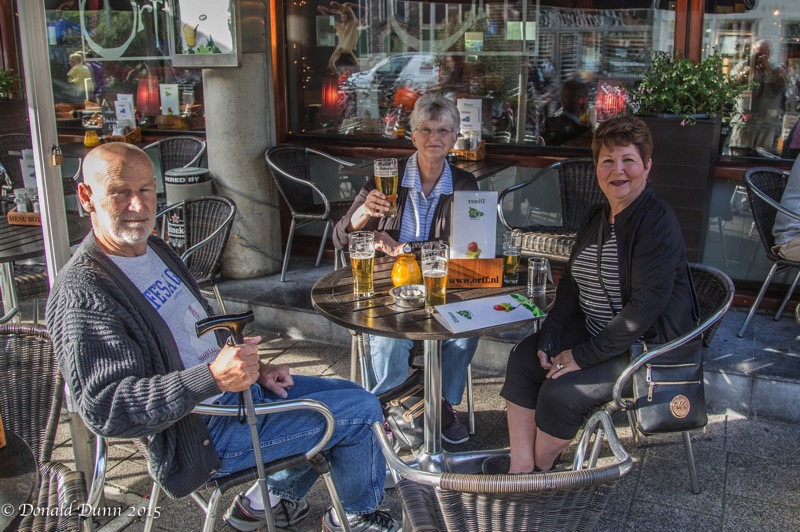 We arrived in Amsterdam at about 12:45 PM Wednesday, August 12, collected luggage, and met the Viking reps for transport to the hotel Raddison Blu.  After checking in, we were in contact with Chuck and Sue Mercer from Alberta, Canada, who had arrived a couple hours earlier, made plans for later in the day, and immediately went to bed for a long nap.  Waking a bit refreshed, we met Chuck and Sue and walked a short distance from the hotel for dinner at a sidewalk cafe, followed by a brief exploration of areas near the hotel.  Though we both went to sleep after arriving back at the hotel, we awoke after a couple of hours, still on Arkansas time, 7 hours earlier than Amsterdam time.  We read, checked email, and otherwise killed time for another couple of hours before falling asleep again. 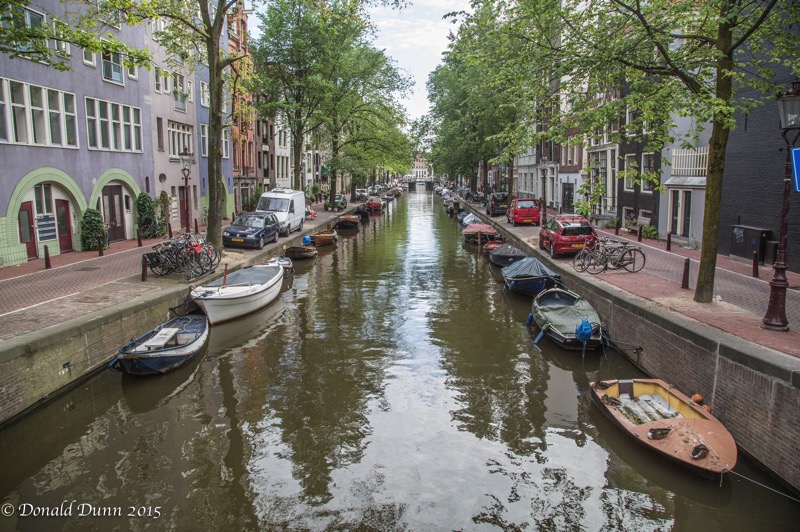 We awoke shortly about 9:15 AM Thursday, August 13, and rushed make the 10 AM deadline for breakfast  The hotel buffet was adequate, but certainly not great, and we were unaware of the pastry, bread, and jam table in an adjoining room until near the end of the meal.  From breakfast, we met Chuck and Sue at the Viking desk, picked up ear monitors to be able to hear the guide, Maarten, and left the hotel with other Viking passengers on the 10:30 AM walking tour of the Amsterdam city center. 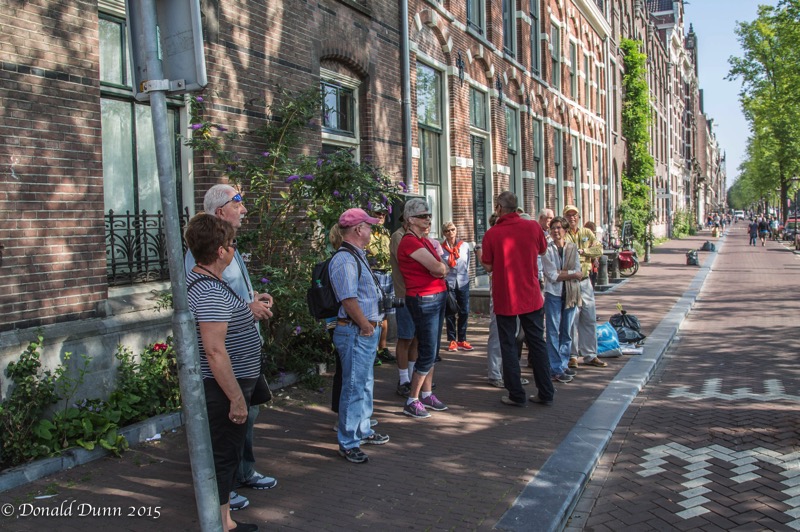 Maarten keep us busy some 2 hours discussing the history, canals, architecture, culture, etc.   We were surprised to learn that Amsterdam has about 800,000 people and 1.2 million bicycles—there is little room for cars on the “streets” and virtually no parking.  Both the bicycles and automobiles have the right of way, and with the density of traffic, we had to keep a watchful eye to avoid being hit!  There were several types of gables on the buildings and most had hoists incorporated into the structure. 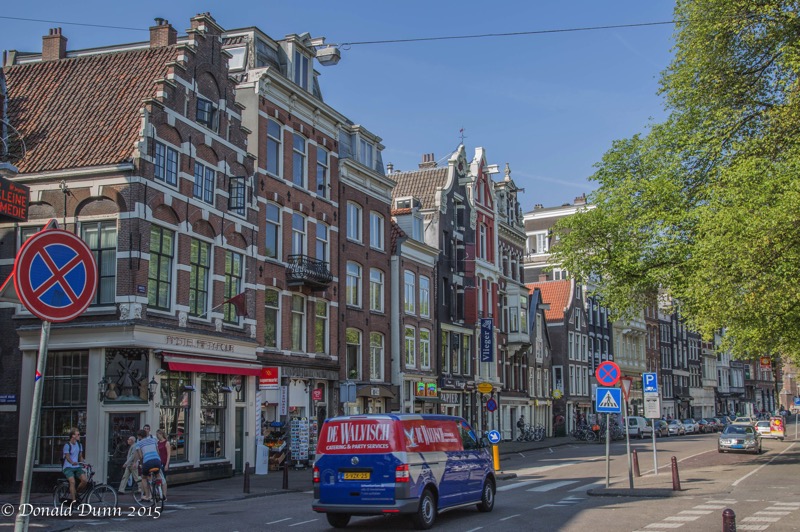 Some leaned to the side because of foundation problems, and some leaned toward the street and canal to ease lifting furniture, etc. via the hoist.

This black building dates to the 1200s. 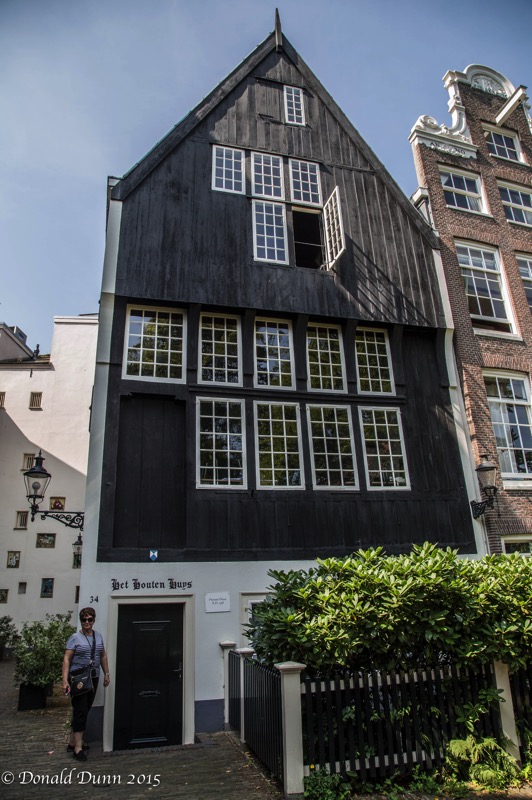 The canals were dirty and trashy by our standards.  We were blown away by the number of bicycles and riders, and not a single rider had a helmet.  They seem to have their own set of rules.  Seemingly, about 95 percent of the people on the crowded streets and sidewalk cafes were younger than 40, and if there was an obese person in the city, we did not see them!  Amsterdam is a “liberal” city and many of the coffee shops sold marijuana as well as hashish.  We were also surprised at the high number of cigarette smokers, and it was near impossible to avoid secondhand smoke.

After the walking tour, we traveled via tram to Rijk’s Museum, the national museum of the Netherlands, to mainly view the Night Watchman by Rembrandt. 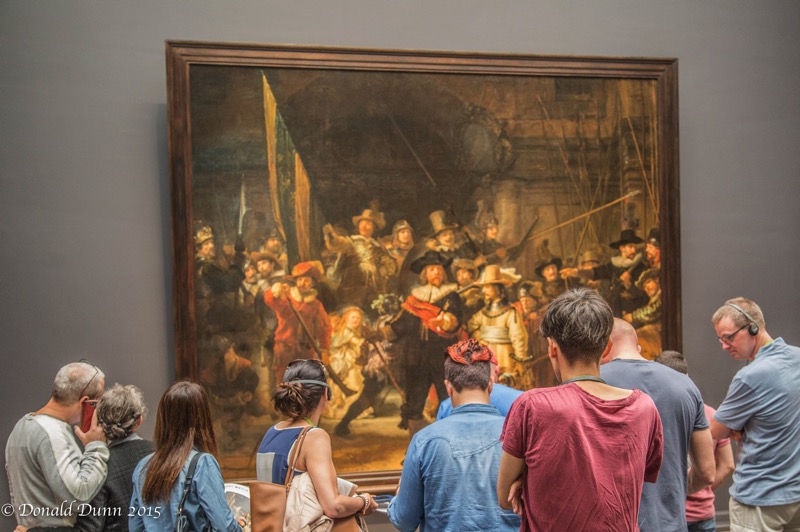 The 90-minute highlight tour featured art dating from 1200-2000.  Approximately 2.5 million people visit the museum each year.  From there, we waked to the Van Gogh museum but was deterred from touring its art by the long, long lines of people waiting to enter.  We returned to the hotel for a brief rest before joining Chuck and Sue for German beer, dinner, and a walk to the Red Light District where prostitution is legal. 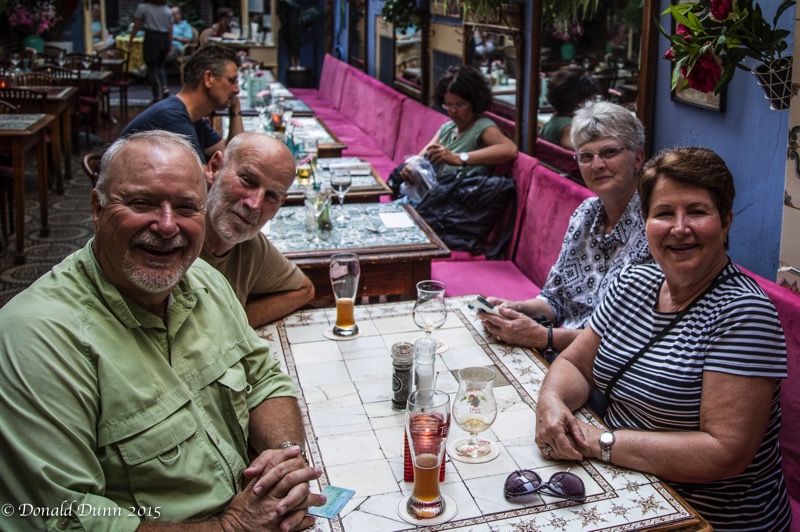 Dating back to Medieval times, this area of Amsterdam consists mainly red-lit stalls with prostitutes advertising their “wares”, coffee shops selling marijuana, sex shops, and peep shows; few of the red-lit “stalls” had prostitutes, perhaps because it was early in the evening.  Further reading about this area indicated that most of the prostitutes were from eastern Europe, Asia, and Africa, and significant human rights violations via organized crime has been exposed.  The architecture of the area was quite interesting as many of the existing structures date to the 1400s.  We returned to the hotel, hoping for a good night’s sleep.

Kay and I finally were able to sleep several hours, despite it being in a couple of segments; our body is still adjusting to the 7 hours difference in time zones.  We awoke on Friday, August 14, with no plans despite it being our last day in Amsterdam.  We checked our luggage, and after breakfast walked the area adjacent to the hotel.  Both bicycle and auto traffic was much heavier than the previous two days, maybe because it was the start of a weekend. 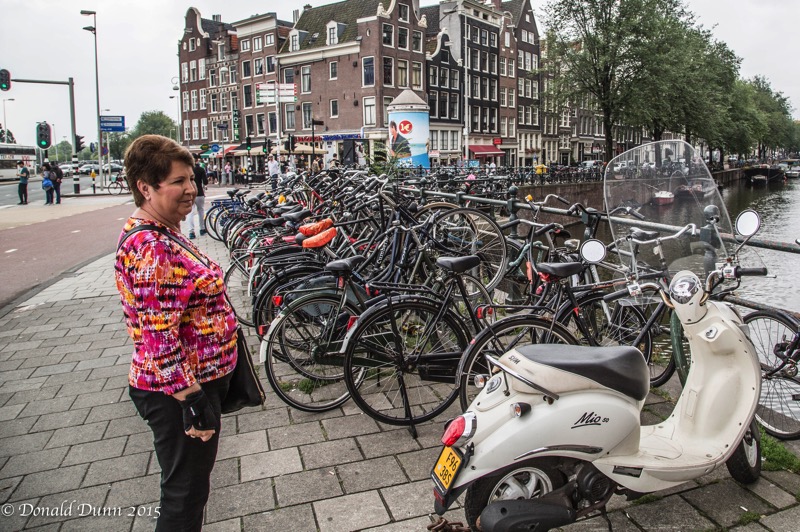 We returned to the Red Light District, mainly to look at the architecture (sure), and I got busted—I surreptitiously took a photo of one of the prostitutes and she came rushing out of her stall and politely asked me to delete the photo as it was against the rules for photos to be taken. I was so flustered that it was difficult to find how to delete a single image, but with her assistance the photo was deleted.  Hopefully, you cannot identify the one shown in the window in the last photo. Visiting the Red Light District sure made an impression, but not a good one.