Well, we’re off again–to Aux Arc (pronounced Ozark) Park, a US Army Corps of Engineers campground on the Arkansas River at Ozark, Arkansas. We arrived a few days early for an Ozark Ridge Runners "Wine Tour" rally which begins Thursday.

When we travel via motorhome, the first couple of hours are the most difficult–getting into a driving rhythm, and the roads are crooked and hilly. Of course, that’s one of the reasons we live where we do. Today was no exception, but we got more comfortable as the miles faded away. Notable highways on our route included AR Hwy 201 near the house, US Hwy 62/412, and AR Hwy 23 aka the "Pig Trail". The Pig Trail is the most crooked and steep road I’ve ever been on in Arkansas and maybe anywhere, complete with hairpin curves and switchbacks. 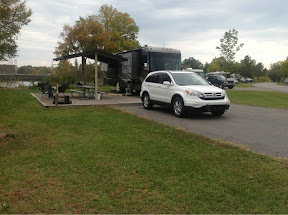 The fall colors were great, particularly given the extraordinary drought we’ve been through since May. Our car’s auxiliary brake did malfunction once again, but we pulled over as much as we could and took it out. I called the company and the technician said Honda cars have a reputation for low amperage coming through the 12V outlet, and BrakeBuddy required 15 amps. He offered to inspect the brake and will send a 12V converter that ties directly into the battery, all complimentary. 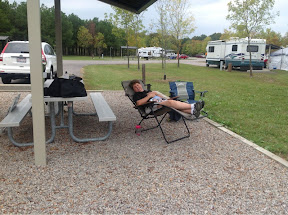 We arrived at Aux Arc about 1:00 PM, set up, and had a light lunch. We walked the length of the campground, about 0.7 miles, and back, and called DishTV to find out why we weren’t getting distant network service; what a debacle. Two calls totaling 40 minutes, and three Middle Easterners later, we (I handed the phone to Kay after 30 minutes) finally got the problem resolved. By the way, as you can see in the last photo, it takes Kay a bit of time to relax.

We drove around Ozark looking for a place to eat and finally settles on a Mexican (Messican as they say in the Rio Grande Valley) restaurant that was quite good.

After returning to the motor home, we settled in for the evening, with Kay watching the last Debate while I played solitaire and read (I don’t want to be confused by the facts as my mind is already made up).