Today marks the last day of May 2012; where did the month go?

Late last night and early this morning the sites on either side of us were filled. After reading email via the phone, and enjoying our first cup of coffee, I stepped outside and saw that Bob had occupied the site just east of us. He left Sharon at home to finish her coffee and crossword puzzle, and came to set up for a two-week stay. They, too, live within easy driving distance of the park. We visited for a few minutes and we left him to finish setting up so he could return home for Sharon, groceries, and additional camping paraphernalia.

Kay and I could not pass up a bright, clear morning on the the water, and drug the kayaks down for some paddling experience. 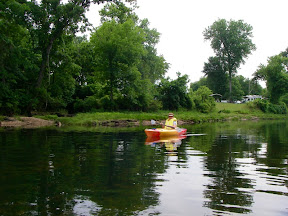 It was much easier the second time around, and I’m pleasantly surprised at how Kay has adapted. 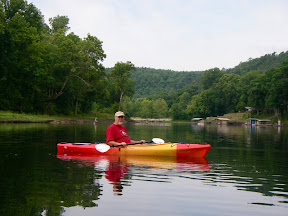 We paddled upstream, then downstream to the riffle below the Resort Hole (which, by the way, has shifted to the far right side of the channel), then back to our take-out and camp site.

By then, the day proved too nice to not fish, so I donned waders, vest, and boots, and drove to an access near the house. There were six fishers below Mill Dam Eddy, which sort of surprised me as access is very limited, i.e. restricted, in this area. Above the island sulphurs were coming off occasionally, and the fish would take them on the surface as long as the sun was shining. With mostly cloudy skies, the hatch of sulphurs was sporadic at best, but I did catch a 17-inch rainbow on a parachute sulphur dun. 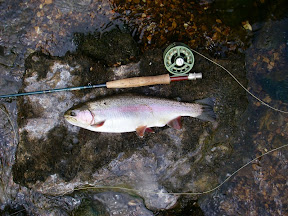 Once the sun disappeared behind the clouds, the fish quit taking sulphurs on the surface, so I switched to a brown Wayne’s fly and zebra midge combination and caught several fish, ending the day with a couple of dozen fish. Returning to the campground, I stopped by the house for a shower and clean clothes.

The cold is getting worse with more coughing, a few aches, and a sore throat and headache. Consequently, it was an early night.