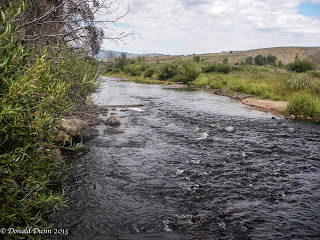 Today was rest and recuperation day after going strong the last several weeks. With some unscheduled time, I walked from the condo down to the Fraser River to take some photographs of the area we fished yesterday. This is a beautiful river with all the assets—pools, riffles and runs, neanders, and undercut banks–needed to make it the gold medal river it is. After a few photos, I began the mostly uphill return, taking advantage of the longer but more peaceful cart paths of the Granby Ranch championship golf course; it’s among the best I’ve seen, including some where PGA events are played. Walking the cart paths avoided the dusty, heavily traveled gravel road. 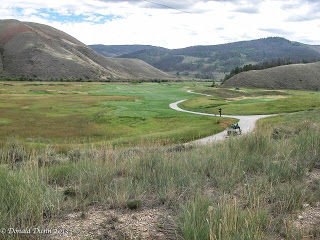 The almost 6-mile roundtrip was great exercise, but resulted in a large blister on the ball of my right foot. Despite telling Kay that the walk may take 3 hours, she came looking for me after a couple of hours and found me not far from the condo.  Our condo is among those shown in the 4 light-colored building units on the right in the last photo.

A short afternoon nap was very much needed—and refreshing. Kay and Sandy left for a brief store sightseeing tour while John and I practiced R&R, which allowed me to catch up on drafting blog entries. Since we did not bring a laptop with us, and since most of the photographs are shot in RAW format requiring Lightroom software to convert into JPEG files, they will have to be added later, maybe next week.

We drove down to Granby for dinner at a local hangout, The Maverick Grille, where we had the best meal of the trip. Our appetizers of fried avocado and Rocky Mountain Oysters were very good, and their green chili was also the best any of us had had. I ordered Wild Bill’s Game Meatloaf (elk, buffalo, and certified angus) and it, too, was very good. The chicken-fried chicken and chicken-fried steak were good, but either cooked in grease that was too hot or too old, resulting in a slightly scorched taste. The bottom line, however, was that the food was very good.

After the heavy dinner, we watched the Denver Broncos manhandle the Baltimore Ravens.