This morning ended our stay in Salida. We were successful in seeing much of south and west central Colorado, so it’s time to move on—to spend some time in Rocky Mountain National Park.

Looking to see different scenery, we drove north to Buena Vista, then to Fairplay (we fished near here just over ten years ago). And then the drive took us through Breckenridge, which is a great city, with lots going on. This area deserves a separate stay sometime in the future… We stopped at Silverthorne near Keystone and Dillon at an outlet mall, based on info from George, hoping to find some bargains at the Columbia store. The walk to the store was on a walking/bicycle trail along a beautiful stream, with several fly fishers plying their skills. The trail passed under Interstate 70, with outlet stores on both sides of the highway. Kay found a few things she could not live without, and we were on our way north to Granby. 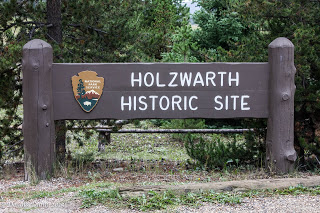 We arrived early, before check-in time, and continued north to historic Grand Lake, and found this small resort town crowded with Labor Day weekend tourists. From there, we drove into Rocky Mountain National Park, and knew an animal was nearby because of the traffic jam. As we got closer, we saw a cow moose grazing along a nearby stream; she was obviously the star of the hour. We parked at the Holzwarth Historic Site parking lot, and walked the half mile to the site (despite occasional lightning and thunder), hoping to see some elk. Now, more about the Holzwarth Historic Site. 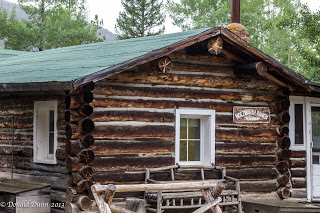 The enactment of prohibition in Colorado in 1916 forced John Holzwarth, Sr., then a Denver saloonkeeper, to start over as a subsistence rancher in what is now the western portion of Rocky Mountain National Park. His new homestead was established in 1917. The ranch never materialized but with the completion of the Fall River Road over the Continental Divide in 1920, he joined other valley residents in serving the increasing numbers of mountain travelers. Thus the Holzwarth’s Trout Lodge was born. The Trout Lodge lasted for 10 years before the ranch was converted to a dude ranch that lasted for 4 decades. In 1973, John Holzwarth, Jr., sold the ranch and all the modern buildings were removed. The old buildings have been restored to 1920 status, and the tour led by National Park Service volunteers was well done.

Driving back to Granby to check-in to our condo, Kay saw two bull moose nibbling on Aspen limbs at the edge of Grand Lake—score two for Kay.

In Granby, and more specifically Granby Ranch, we checked-in at Mountainside Inn, drove the short distance to the condo, and unpacked. The condo, procured through Armed Forces Vacation Club, was a bit nicer than expected, with an open kitchen, dining, and living area, two bedrooms down, each with their own bathroom, and a loft with two double beds and a private bath; the master bedroom downstairs even had a large, 4-person hot tub! This is a nice condo.

We drove back to RMNP, and saw a bull elk with a small harem just past the entrance. No more animals showed themselves this evening.

Back in Granby, we stopped at a great grocery store to stock up and returned again to the condo. This wrapped up a full day for us.